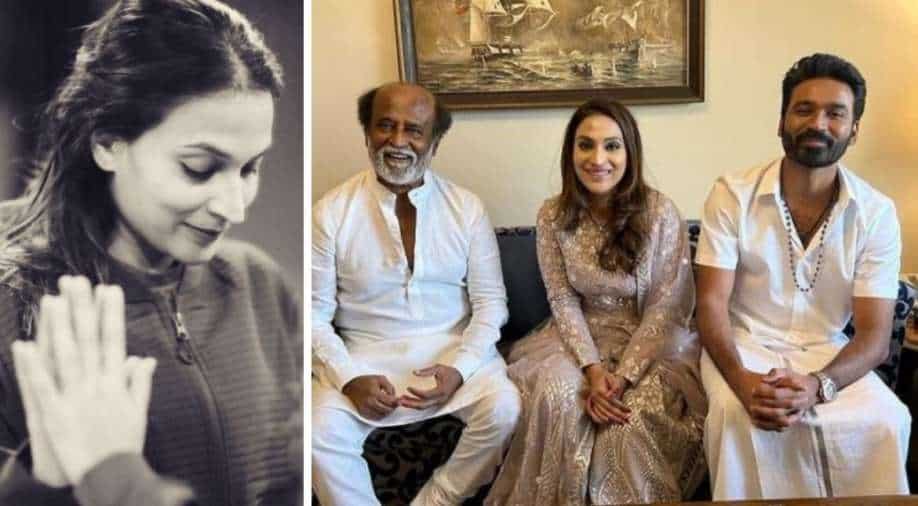 Aishwaryaa with father Rajinikanth and husband Dhanush in a dated photograph Photograph:( Instagram )

On Monday, Aishwaryaa and Dhanush announced their separation after being married for 18 years.

Her father is one of the biggest superstars of India. She is married to one of the most popular actors in the current generation, but despite being part of film royalty, Aishwaryaa R Dhanush has lived a life relatively away from the limelight.

On Monday, Aishwaryaa and Dhanush announced their separation after being married for 18 years. The news left fans across the country shocked as no one had seen it coming. In October 2021, Aishwaryaa had shared a photo from the National Film Awards ceremony where her father, superstar Rajinikanth was honoured with the prestigious Dadasaheb Phalke Award while her husband Dhanush won the Best Actor award for 'Asuran'. In the photo, Aishwaryaa sat between her father and husband and captioned the image as, "They are mine....and this is history #prouddaughter #proudwife".

While Aishwaryaa has kept a relatively low profile despite her connections to films, the 40-year-old mother of two boys has also created her own niche in showbiz.

A trained Bharatnatyam dancer Aishwaryaa was appointed as UN Women's Advocate for gender equality and women's empowerment in India in 2016.

Aishwaryaa had also directed the Tamil film '3' which starred her husband Dhanush and Shruti Haasan in 2012. The film's song 'Kolaveri D' sung by Dhanush was a blockbuster hit even before the film was released. However, the film itself was not very successful at the box office. The film had received mixed responses. In 2015, she directed the dark comedy 'Vai Raja Vai' which had an ensemble cast starring Gautham Karthik, Priya Anand, Vivek, Gayathri Raguram and Daniel Balaji. Taapsee Pannu and Dhanush made a cameo appearance in the film.

Aishwaryaa has also done playback for two films- one in 2003 for a film called 'Whistle' and then in 2010 she sang 'Un Mela Aasadhan' for the film 'Aayirathil Oruvan'. The song fetched her Best Playback Singer (female) nomination at the Filmfare awards.

A voracious reader, Aishwaryaa also dabbled into writing and wrote 'Standing on an Apple Box: The Story of a Girl Among the Stars' in 2016 which was semi-autobiographical and talked about living in a family of superstars.

Earlier this month, she announced she would be directing a music video which will be released on February 14.

On Monday, Aishwaryaa took to Instagram to announce her separation from Dhanush who was last seen in the Hindi film 'Atrangi Re'. Dhanush and Aishwaryaa shared similar posts on social media.

The couple share two sons- Yatra and Linga- together.