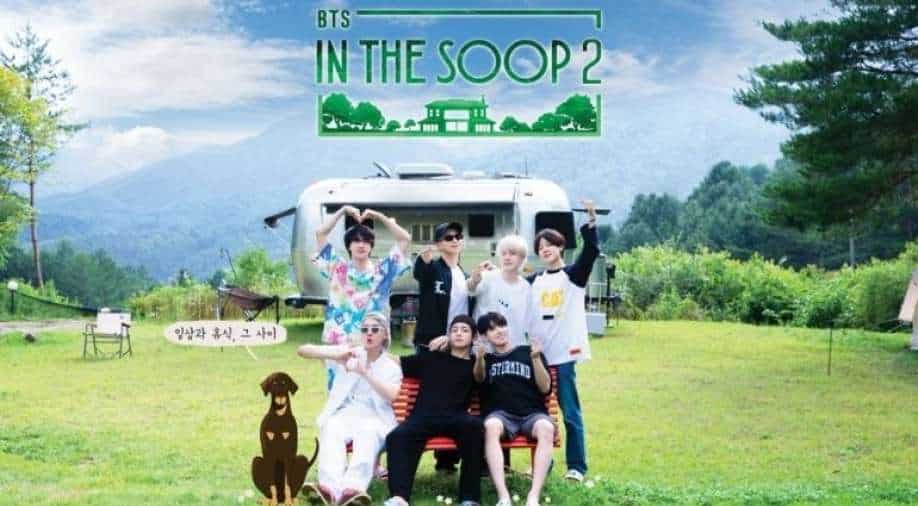 BTS group is looking absolutely stunning in casual summer outfits while simply sitting on a bench with an animated dog by their side.

BTS' 'In the SOOP' is almost here!

The first look of 'SOOP' season 2  was released recently, and it has given BTS Army a new reason to cheer them on.

In the new picture, the BTS group is looking absolutely stunning in casual summer outfits while simply sitting on a bench with an animated dog by their side.

Here’s the official poster for ‘BTS In The SOOP 2’:

The new teaser released shows a picturesque location somewhere in South Korea, especially for BTS. Further, the video shows the construction work of a villa.

The video also has voiceover by BTS members and their reactions after seeing the place. One BTS member said, "Like a mansion?", and Jin said, "Isn't this basically a castle?" SUGA said, "This isn't a view you can easily see in Korea.".

V says, "It felt like a secret place that I wanted only us to know about."

Check out the teaser below:

The ARMY reacted with the same enthusiasm, scroll down to take a look.

This is insane!! They did a grand-scale construction for BTS In The Soop season 2 which looks like mansion?! They have swimming pool, tennis court, basketball court, gym, etc😲 pic.twitter.com/HscPNDFHfG

THEY BUILT A WHOLE MANSION FOR IN THE SOOP???? "FOR BTS AND BTS ONLY" sexc!!! pic.twitter.com/eevU4CAOvY