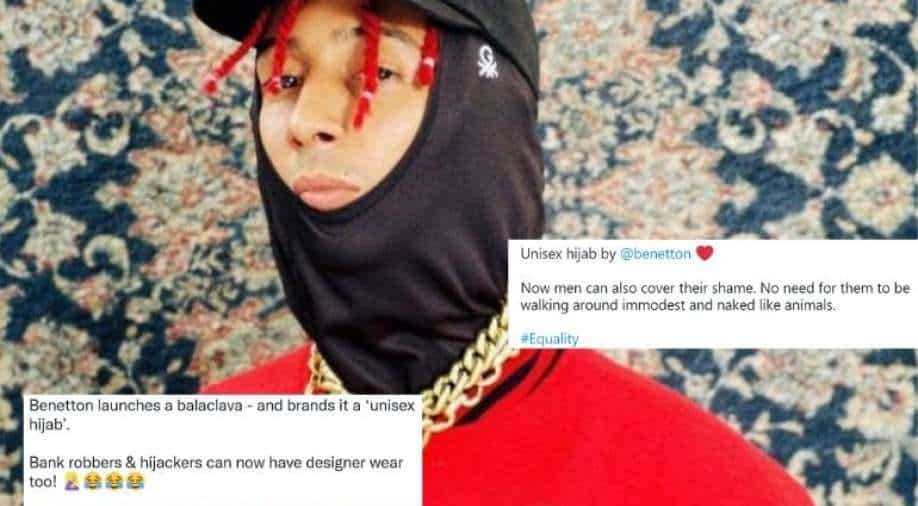 A hijab is a religious veil worn by many Muslim women in the public and usually covers the hair, head and chest.

The fashion industry is rapidly evolving and it's pretty difficult to predict what's coming in the future. The new fashion innovation that has taken the centre stage and blown our minds is a 'unisex hijab'.

Global fashion brand United Colors of Benetton has launched a new range of the traditional Islamic headwear: a unisex hijab in collaboration with Italian rapper of Tunisian origin, Ghali Amdouni.

Henry Cavill still feels there is more of Superman left in him: It was a God-like being

This latest piece of garment is described as, ''Unisex hijab in stretch fabric. Small clashing print on the left side that combines the Benetton logo with Ghali's G. This accessory belongs to the ''United Colors of Ghali'' capsule collection, created by Ghali.''

The rapper had also shared some pictures of him donning a unisex hijab, which was launched in Milan Fashion Week earlier this year, on his Instagram page.

A hijab is a religious veil worn by many Muslim women in the public and usually covers the hair, head and chest.

The singer, 28, reportedly said: ''The hijab is a unique garment that I wanted very much. There was no resistance from the company to include it in the collection. When I was a child, I was bullied at school, there was no one to represent me, while now it is normality.

Rapper added, ''I am tired of hearing how everything Arab or Tunisian is associated to something negative. When I was little, my mother was afraid that I would go out with my Arab companions, she preferred that I have Italian friends. Now I think it is important to say that this diversity is an added value, it is what makes me unique.''

Henry Cavill still feels there is more of Superman left in him: It was a God-like being

From appreciating to criticising the new innovation, the garment has become a new subject of discussion and has garnered a mixed response from netizens.

Meanwhile, some social media users used it as a source of inspiration to create memes and said bank robbers & hijackers can now have designer wear too.

Check out the reactions below:

Now men can also cover their shame. No need for them to be walking around immodest and naked like animals.#Equality pic.twitter.com/jrcT5q6kvb

Now men can also cover their shame. No need for them to be walking around immodest and naked like animals.

What say you? #Equality pic.twitter.com/ktnkmdyu5b

Could it get any worse than this?https://t.co/gDLDkLrEPL

wonder when Benetton introduces enormous sheets for men to hide the rest of their bodies too, next to the hijab. 🧕🏼

The ‘unisex hijab’ from @Benetton.

A succinct example of how ‘inclusivity’ erases women’s sex-based oppression, and transforms it into a product, a performance, that men can try on for themselves.https://t.co/XKafb0vbVN pic.twitter.com/qnj9OrVcPJ

Benetton launches a balaclava - and brands it a ‘unisex hijab’.