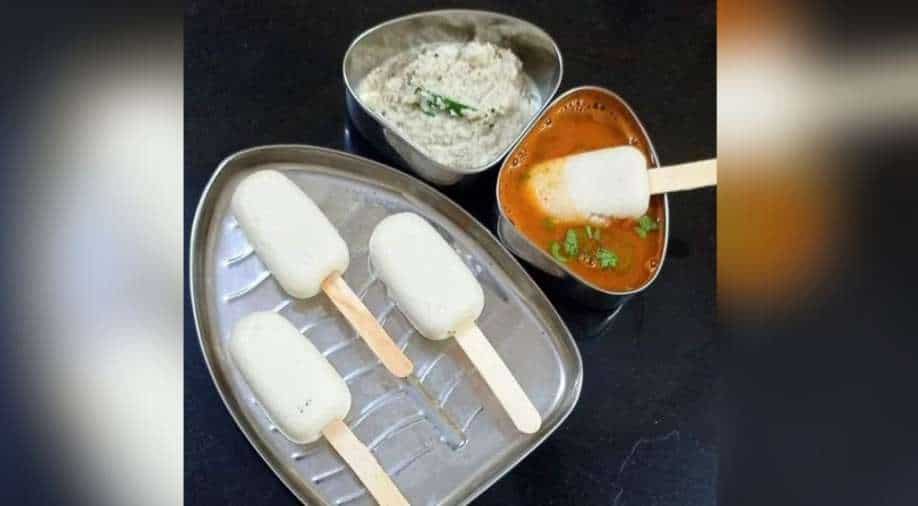 The viral image that has caught everyone's attention Photograph:( Twitter )

The immensely popular south Indian dish Idli-sambar has got a new twist thanks to a restaurant in Bengaluru.

No one innovates food the way Indians do. Almost every popular dish gets a desi spin to cater to the palates of locals. We have seen tandoori momo and schezwan dosa before. Now, we present you Idlis on ice cream sticks. Yes, you read that right.

The immensely popular south Indian dish has got a new twist thanks to a restaurant in Bengaluru.

Twitter user BrotherToGod shared a photo of the said dish- complete with sambhar and coconut chutney - popular accompaniments with Idli. In the photo, three idlis on sticks are placed on a plate while another is dipped in a bowl of sambhar.

Innovative food technology of how the Idli got attached to the Ice cream stick.
Bengaluru and it's food innovations are always synonymous!@vishalk82 pic.twitter.com/IpWXXu84XV

The photo naturally attracted a lot of attention on Twitter and left the internet divided. While some welcomed  the new idea of presenting an age-old staple dish, others slammed it urging restaurants to 'leave it alone.'

For those living under a rock, Idlis are made of fermented rice batter cakes - which is a popular breakfast/mid day meal item across south India.

Here are some of the reactions on the viral image.

People from other side are trying to save the trees and finding alternatives, here these guys are wasting those sticks unnecessarily in the name of creativity!

Looks more like a popsicle / ice pop being dipped in Sambar! 🙂 (An Idli doesnt melt - picture shows some white fluid on the left stick)

Many asked the user the name of the restaurant but the user admitted that he was not aware which restaurant was serving the dish.

Lost Cubist painting by Leger found on back of another canvas