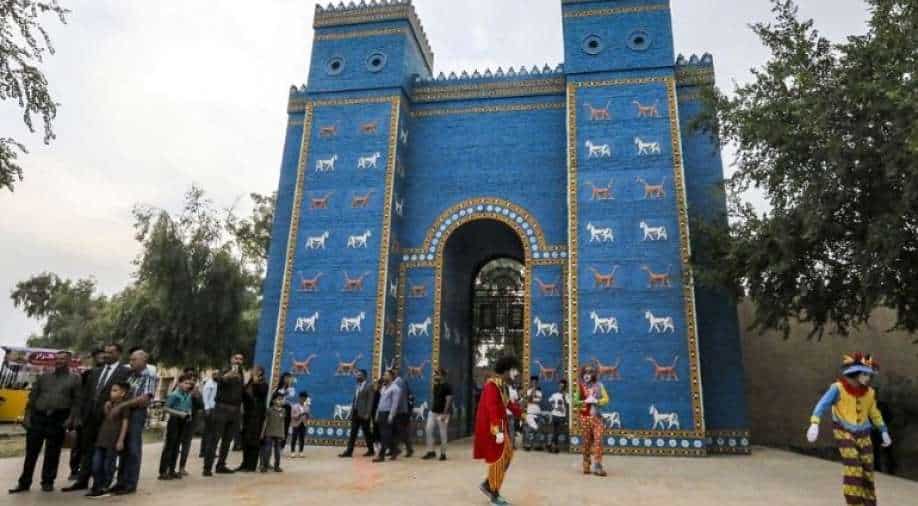 Clowns perform while visitors pose for a photo by a replica of the Ishtar Gate at the Babel (Babylon) International Festival, at the archaeological site of ancient Babylon, about 100 kilometres south of Iraq's capital. Photograph:( AFP )

The last edition of the festival was held in 2002, the year before the US-led invasion that toppled the veteran dictator Saddam Hussein

"It's a great joy. We haven't seen a festival like this for years," said Shaima, 45, visiting the event at the ancient archeological site with her two daughters.

The last edition of the festival was held in 2002, the year before the US-led invasion that toppled the veteran dictator Saddam Hussein.

In the years after, Iraq saw war between US troops and insurgents, sectarian clashes and the battle against the Islamic State group. Tens of thousands died and much of the country and its rich cultural heritage were reduced to rubble.

Today there is relative stability, though marred by periodic IS attacks and political tensions, and Iraqis are looking to the future. The five-day festival, which ended Monday, is one of the symbols of this new hope.

The arts showcase, staged in what was the capital of the ancient Mesopotamian state of Babylonia, this year drew artists from dozens of countries including Jordan, Serbia and Russia as well as homegrown talent.

"It's a fundamental change compared with the terrible ordeals that we suffered," Shaima said.

The festival, first launched in 1987, was staged at the majestic UNESCO World Heritage site of Babylon, south of Baghdad.

Most performances were held in the Babylon theatre which Alexander the Great built around 311 BC.

Because history, both ancient and modern, is never far away in Iraq, one of the palaces Saddam built still stands just a few hundred metres (yards) from the Babylonian ruins.

In the shadow of a replica of Ishtar Gate, built originally by Nebuchadnezzar II around 575 BC, Iraqi photographer Haider al-Masalmawi was showing his work to visitors.

He voiced hope that the festival would "relaunch art, culture and even the economy of Iraq. It's a showcase."

Egyptian performer Mohammed Fathy said he was happy to be back in Iraq, as melodies from his Al-Ahram group played in the background.

"I came here as a dancer in the 1990s and returned today as stage manager," he said.

A Serbian folklore group along with Jordanian and Palestinian practitioners of dabkeh, a Middle Eastern line dance, were rehearsing their show.

Yasser al-Ardawi, head of the Jordanian troupe, while arranging his red and white keffiyeh head covering voiced confidence that the festival's return means that "security and stability have returned to Iraq".

Funding for culture is still often an after-thought in Iraq, a corruption-plagued country with crumbling infrastructure where millions live in poverty despite the nation's vast oil wealth.

The festival was financed privately, said its executive director Mohamed al-Rubaie, adding that the event also faced other challenges.

Babylon is located close to the Muslim Shiite shrine cities of Karbala and Najaf, both socially conservative centres of religious study.

Two days before the festival's opening, the governor of Babylon province, Hassan Mendil, demanded the cancellation of concerts at the festival in response to calls from "religious students".

But the song and dance shows went ahead.

"It's a joyous festival that reflects Iraqi culture," Rubaie said. "Of course there are some fears and we take into account the opinion of others."

Those fears were brushed off by festival visitor Ali Saleh from Diwaniyah, south of Babylon.