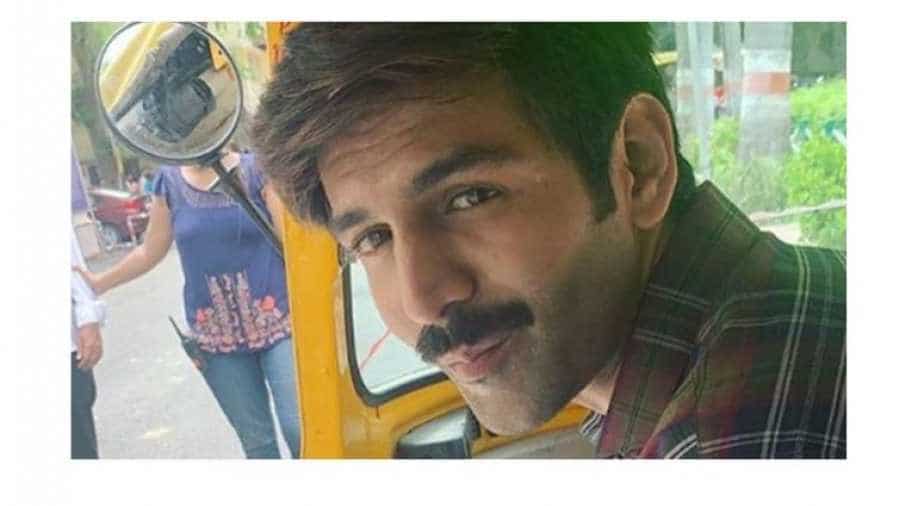 Bollywood actor Kartik Aaryan, who is currently shooting for his upcoming film `Pati Patni Aur Woh`, revealed that he is on "full-on diet".

No matter how flawless, fit and larger than life they may seem, celebrities love binging on their favourite food just like the rest of us, and that`s what makes them relatable.

Bollywood actor Kartik Aaryan, who is currently shooting for his upcoming film `Pati Patni Aur Woh`, revealed that he is on "full-on diet" and his co-star Bhumi Pednekar is making sure that even while maintaining his fitness regime, the actor is getting to relish pizza.Sporting a thick moustache and donning formal wear, Kartik can be seen enjoying his delicious box of pizza.

The `Luka Chuppi` actor revealed that the pizza was sent to him by Bhumi. Sharing the picture, Kartik wrote, "When Patni wants foodie Pati to look fit. Thank you @bhumipednekar for sending pizzas. Full on diet chal rahi hai Lucknow mein !!

PatiPatniAurWoh."The star, who was last seen with Kriti Sanon in `Luka Chuppi` will be seen sharing screen space with Bollywood newbie Ananya Panday and Bhumi for the first time in the upcoming flick.For this film, Kartik has ditched his usual boy-next-door look that he sports in most of his movies.

The actor will be seen in a simpler avatar playing the role of Chintu Tyagi in the film. `Pati Patni Aur Woh` is a remake being directed by Mudassar Aziz, who has previously helmed films like `Dulha Mil Gaya`, `Happy Bhag Jayegi` and `Happy Phirr Bhag Jayegi`

The film is an adaptation of the 1978 drama of the same name, which featured Sanjeev Kumar, Vidya Sinha and Ranjeeta Kaur in the lead roles. The original film revolved around a married couple Ranjeet (Sanjeev) and Sharda (Vidya) and how things change after he gets involved with his secretary Nirmala (Ranjeeta).The upcoming film is slated to release on December 6, this year.

Apart from this film, Bhumi will be seen next in `Saand Ki Aankh` and `Bala` while Kartik will feature in Imtiaz Ali`s next, co-starring Sara Ali Khan. He will also be seen in Karan Johar`s `Dostana 2` with Janhvi Kapoor. The actor has also bagged `Bhool Bhulaiyaa 2`,stepping into the shoes of Akshay Kumar.