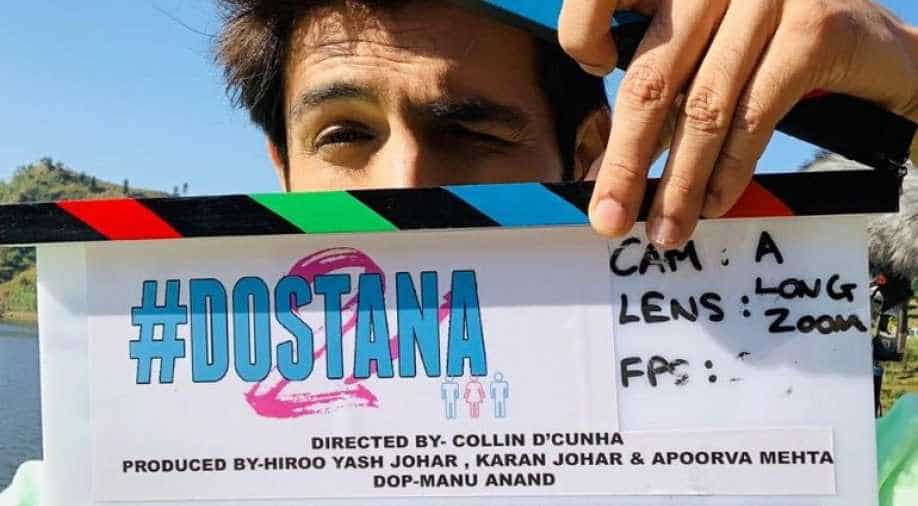 Kartik Aaryan began shooting for his next film 'Dostana 2' in Chandigarh on Saturday. The actor shared the exciting news on his Instagram page where he shared his half-face picture along with the clapper-board.

"#Dostana2 Begins !!!" he captioned the picture. Before commencing the shoot of his much-awaited film, the 'Luka Chuppi' actor shared a post on the photo-sharing application where he can be seen seeking blessings from Karan Johar.

The ace director can be seen blessing him with good luck."Maa da laadla #Chandigarh nikal gaya#Dostana2 !! The Dharma rivaaz that all actors need to follow before starting a Dharma film @karanjohar," he wrote.

As soon as the 28-year-old shared the picture, Karan was quick enough to comment. "Haha! That's rubbish! Stop aging me," he wrote. Earlier, Janhvi Kapoor who is also an essential part of the star-cast visited Golden Temple in Amritsar along with the director of the film, Collin D'Cunha, to seek blessings.

Clad in blue traditional outfit, the 'Dhadak' star was seen posing with the director, with the beautifully illuminated temple in the backdrop. The film directed by Collin is penned by Navjot Gulati, Sumit Aroraa, Rishabh Sharma and D'Cunha.

Priyanka Chopra, John Abraham, and Abhishek Bachchan-starrer's 2008 release 'Dostana' caused quite a stir among the audience with its unique and humorous plotline and the fact that it dealt with the less talked about subject of homosexuality.