In pics: Kangana Ranaut's Diwali has snow and family as she celebrates in her posh Manali house 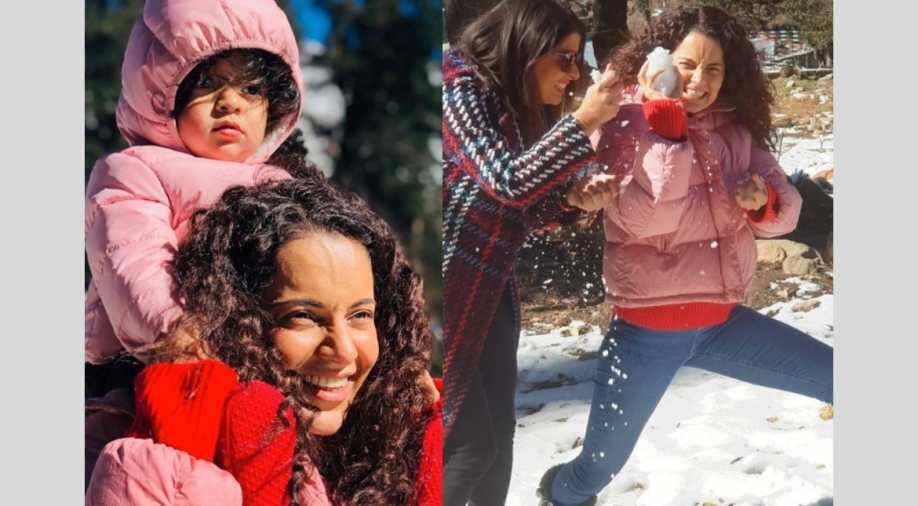 While Bollywood celebs are pretty big on Diwali and so ultra glam for parties decked up in the finest of the traditional wear; Kangana Ranaut celebrated the festival of lights in a different manner. Kangana flew to Manali, her hometown and was seen having a good time with sister Rangoli, nephew, brother Akshat and others at her plush villa.

In photos shared by her official Instagram account, Kangana can be seen on the day of Diwali, having a gala time with them all as she plays with snow. With snowballs in her hand, she can be seen laughing merrily with Rangoli.

In one, she carries her nephew Prithvi on her shoulders. Interestingly, both Prithvi and Kangana can be seen twinning in pink jackets.

#KanganaRanaut, @rangoli_r_chandel and brother #AkshitRanaut indulge in Pre Diwali masti and wish all a very #HappyDiwali from snow clad hills of Manali

Kangana’s team also posted some videos of their snow fight.

In an interview with a Mumbai-based newspaper, Kangana spoke on spending Diwali in Manali. She said, “My entire family will come together this Diwali. My brother is introducing us to his girlfriend and making the relationship official, so we wanted to be together on this special day. It’s also my nephew Prithvi Raj’s first Diwali. Since he’s just a baby we will avoid noisy crackers.”

Kangana’s famed villa in Manali is a modern-day plush home with the finest of interiors and technology. The pictures of her villa went viral as they were released on the photo-sharing app some months back.

Kangana will stay in Manali for only three days as she has to resume work on her film ‘Manikarnika.’ The film is currently in its post-production phase.

After this, she will start work on ‘Panga’ from November 9 in Bhopal.