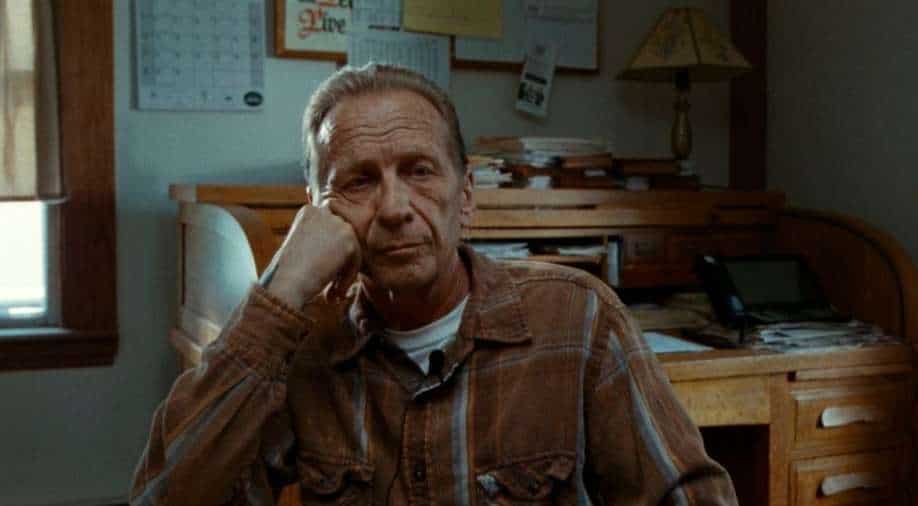 For most of his career, Raci has had to make do with one- or two-line roles in TV shows like 'Parks and Recreation' and 'Baskets.' Then 'Sound of Metal' director Darius Marder plucked Raci from obscurity and handed him the part of a lifetime.

It’s been a long time coming for Paul Raci, who just earned his first Oscar nomination at age 72.

“To be an actor for all these years — 40 years of just knocking around — and then to have this kind of acclaim, it’s insane, man,” Raci said recently in the backyard of his Burbank home.

For most of his career, Raci has had to make do with one- or two-line roles in TV shows like “Parks and Recreation” and “Baskets.” Then “Sound of Metal” director Darius Marder plucked Raci from obscurity and handed him the part of a lifetime: Joe, the stoic but sensitive leader of a sober-living community for deaf people who takes in a troubled punk-metal drummer, Ruben (Riz Ahmed).

It’s a role with real-life resonance for Raci, who grew up in Chicago as a CODA — a child of deaf adults — and, like Joe, dealt with addiction issues after serving in Vietnam. “I always say I went into Vietnam like John Wayne, and I came out Lenny Bruce,” Raci said.

A lifetime spent as his parents’ hearing interpreter had instilled in Raci a love for performance, but when he moved to Los Angeles decades ago to pursue an acting career, roles were scarce. “I’ve been doing this a long time, and I’ve always known what I was capable of, but nothing was happening for me out here,” he said.

Still, Raci kept plugging away, working by day as a sign language interpreter in the Los Angeles County Superior Court system and at night continuing to hone his craft in stage productions at the Deaf West Theater. “I would always think to myself, ‘I must be so specific that there’s nothing around here for me,” said Raci, who is small and wiry with tattoos and rocker-length hair. “I thought, ‘I’ve got to wait for that specific role.’” And then it finally came.

These are edited excerpts from our conversation.

Q. What was the morning of the Oscar nominations like for you?

A. Well, I don’t have an alarm clock — I have a head clock, and for some reason it was unplugged that morning. I was supposed to get up at 5 a.m., and at 5:25 a.m., my wife and I got up: “Oh, we missed it!” We run in the living room, turn on the TV, and just as it came up, they were on the second guy from the supporting actor category. And then [presenter Priyanka Chopra Jonas] goes, “And Paul Rah-ci.” I said, “No, it’s Ray-ci … and I accept!”

So now it’s 5:30 in the morning; my phone starts ringing. People are showing up with wine; they’re showing up with edibles — not the kind you’re thinking about, but fruit covered with chocolate, and cupcakes. My friend Hillary, she brings over a bottle of Champagne. I said, “It’s six o’clock, Hillary!” My wife is crying; my daughter is crying. It stayed like that all day long, so it was quite exciting.

Q. And what was it like after the dust settled?

A. Six days later, I looked at my wife, and I said, “Did this really happen?” But if I had to wait this long for this moment, it’s worth it, man. A very good friend emailed me two days ago and said, “Paul, this is not just a supporting actor nomination, this is a lifetime achievement award.” I hadn’t thought of it that way, but I got a lot of work left to do here. I think this thing has added 20 years to my life.

Q. For decades, you had been doing day-player work in movies and television. How did you make those kinds of roles feel worthwhile?

A. To be honest, it’s more of a detriment than anything because it just shows you what an abysmal failure you are in your own head. I mean, I wasn’t able to get a series-regular audition or to even get in the room because, “They need a name.” Thank God for Deaf West Theater; if it wasn’t for them, where the hell else was I going to exercise my acting chops? I had nothing. But you go from gig to gig and hope that something’s going to happen.

Q. So how did it finally happen? When you auditioned to play Joe in “Sound of Metal,” did you have an inkling that this time might be different?

A. I put it on tape, sent it in and then forgot about it — because, listen, this never happens for me. When I leave an audition with the sides [script pages] in my hand, I rip them up, throw it in the garbage. I’m not going to dwell on stuff that’s going to break my heart. But my wife, who’s my agent, called the casting directing office and said, “Have you seen Paul’s tape?”

At that point, they said, “We’re inundated with tapes. We’ve got too many that we can’t even find Paul’s tape, and we’re probably going to go with a name.” Robert Duvall, Forest Whitaker, that’s what they were looking for, namewise. My audition tape was fairly strong, and my wife said, “Please, look for it.” Ten minutes later, the phone rings. The casting office goes, “Darius wants to talk to Paul.” A week later, he drove down to meet me, and we talked and talked.

Q. It must be great to have a wife who fights for you in that regard.

A. Listen, she’s been a small-time agent here for over 20 years, trying to compete with CAA and ICM. She has a boutique agency, and she said, “I’m not going to close it until you’re a star, Paul.” She was always fighting to get me in a room, and it never happened. My mindset was so stuck in rejection that even at the end of my conversation with Darius, I said, “Hold on a second, are you actually offering me the role?” He said, “Yes, I am.” But at first, I told them I wasn’t going to do the movie.

A. Look, I got a house to pay for here. This is not the big movie I thought it was; it was a very small budget, and I could make more money staying here in LA and working in the court system than what they were offering me. I’m going to go all the way over there [around Boston] for something that’s going to put me in the hole? I can’t afford that; I don’t even have health insurance for my family. So I said to my wife, “Tell Darius I’m not interested.”

A. Well, it looked like a pretty good movie, but I’m a blue-collar guy like my dad, and I’ve got to pay my bills. Then Darius calls me: “You can’t do this! You don’t understand what this means.” So they kind of bumped up my per diem. He was so flexible with me, and I knew his heart was in the right place; he was so respectful to my point of view, to my CODA experience, that I felt like I could trust him.

Q. Although you’re a child of deaf adults, you’re also a hearing person. Is there a case to be made that Joe should have been played by someone who is deaf or hard of hearing?

A. That’s an argument that some would make in the deaf community, yes. However, I would argue back because I’m a CODA and you cannot take me out of this culture that I was brought up in. I would never take a deaf role from a deaf actor who is culturally deaf, but Joe is a guy who was late-deafened.

I’m sensitive to it, and I vetted it before we went ahead. I asked Darius in the beginning, “I don’t feel comfortable having this guy be deaf. Can’t you make the guy a CODA?” He said, “That’s interesting. Let me get back to you.” He had three deaf advisers on the set, and all three told Darius, “No, it’s more compelling to have him be deafened,” to have that parallel line between Ruben and Joe, which you feel so strongly.

The beautiful thing about it is, I’m hooked into [“Sound of Metal” distributor] Amazon right now, and they’re coming to me and asking for content. I have other things I’ve written, I have other deaf writers I know of, and because of this connection, I think some doors are going to be kicked down, because people are interested in what I have to say right now.