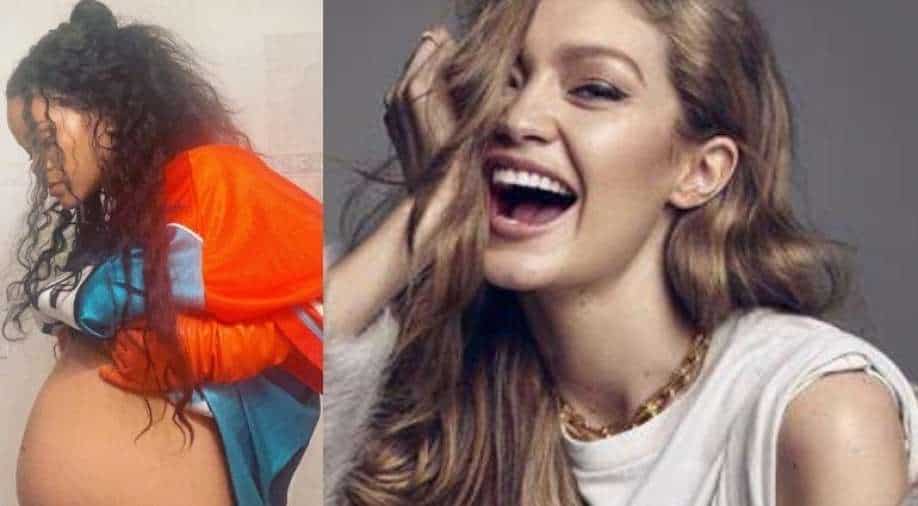 Rihanna is expecting her first child with boyfriend A$AP Rocky.

Gigi Hadid is clearing all the rumours!

Last week, after Rihanna revealed she's expecting her first child with boyfriend A$AP Rocky, she took to her own Instagram feed to post an intimate bathroom snap showing off her bump.

In the photo, Rihanna can be seen lifting up a football jersey to reveal her growing belly and is lovingly staring at her bump. She can also be seen wearing long leather gloves. The singer captioned the image, along with photos from her and A$AP Rocky's pregnancy announcement earlier this week, "how the gang pulled up to black history month."

Reacting to the photo, Gigi took to the comments section, and wrote, "😭three angels 💘." After her comment, fans couldn't help but wonder that Gigi's has mistakenly shared a big secret and comment means, Rihanna and two babies as one user questioned: "3?!?!?! Twins??," another asked: "does this mean she is having twins."

However, several days later, Gigi clarified all the fuss that her comment had caused, by adding another message saying that the three angels she’s referring to are
- Rihanna, her boyfriend A$AP Rocky, and their future child: "I just caught word of this commotion. I meant Rih/Rocky/baby lol,'' Gigi commented.

Also read: From Drake to A$AP Rocky: A look at soon-to-be mommy Rihanna's past love life

Last week, the fashion mogul and her rapper boyfriend announced their pregnancy news. The couple has been dating since November 2020. In the photo, the singer debuted her bump while wearing a bright pink jacket that was unbuttoned at the bottom to show off her bump, which was adorned in a gold cross and jewels.

The 33-year-old mother-to-be has not reacted to the news yet.