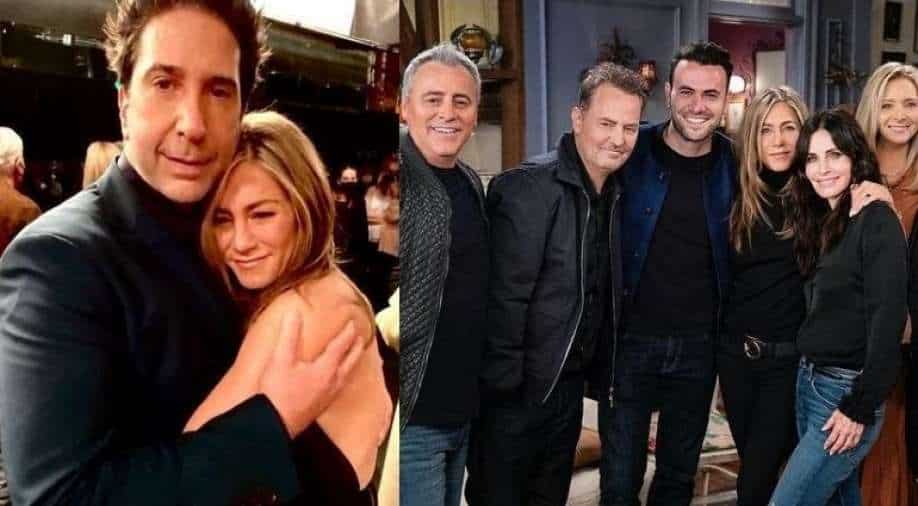 David Schwimmer, who played Ross in the show has shared a series of BTS photos including one where he can be seen hugging co-star Jennifer Aniston who played his love interest Rachel on the show.

It has been over a week since 'Friends' reunion episode aired worldwide bringing back memories of the the iconic show. The six lead actors came together for a special unscripted show which most fans are still talking about.

Now, David Schwimmer, who played Ross in the show has shared a series of BTS photos including one where he can be seen hugging co-star Jennifer Aniston who played his love interest Rachel on the show. This is how much each 'Friends' star is being paid for the reunion episode

The photo is extra special as it comes right after the two actors admitted on the reunion episode that they had feelings for each other while filming the first season.

"Yeah the first season I had a major crush on Jen," said Schwimmer as the audience collectively gasped. The actor revealed that that feelings were mutual. "Both at some point, we were both crush hard on each other but it was like two passing because one of us was always in a relationship. So we never crossed that boundary, we respected that."

On Monday, Shwimmer shared multiple behind-the-scene photos from the sets which featured actors Matt LeBlanc, Lisa Kudrow, Matthew Perry, Courteney Cox along with Schwimmer and Aniston.The one where they all look back: Major revelations made during the 'Friends' reunion
.
"Reunion Snaps Part Two. 1. Our Reunion Director & EP, the inspired and crazy talented @mrbenwinston 2. Table read 3. On the couch with the best possible host we could have asked for, Mr. James Corden 4. Unexpected reunion with our brilliant and big hearted 1st AD! Thanks for all those years @benweiss71 5. Cast huddle right before the live Reunion audience 6. After a very long day, last hug of the night Thank you @hbomax for bringing us back together…All professional still photography courtesy of @terencepatrick and @warnermedia" the actor captioned the images on his Instagram page.

He also shared snaps of their prep meetings on Zoom prior to the filming of the episode.

The 'Friends' reunion episode had the cast coming together for the first time in 17 years after the show ended in 2004.