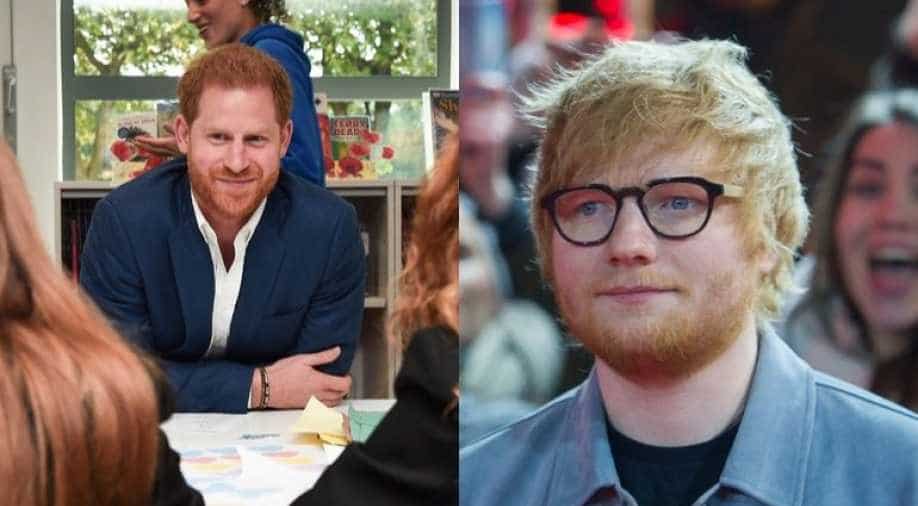 While opening the door and inviting the singer inside, Prince Harry said, "It's like looking in a mirror". The short video ended teasing, "Tomorrow 10th October".

After teaming up with Camila Cabello, Cardi B, Justin Bieber among others, singer-songwriter Ed Sheeran seemed to have found a new partner in the Duke of Sussex, Prince Harry.

Sheeran and Harry on Wednesday teased their fans on a secret collaboration coming out on October 10, with a cryptic video. The clip shared through the official Instagram handle of the Prince featured the 'Perfect' singer ringing the doorbell at Harry's house, which rang to the tune of 'God Save the Queen'.

While opening the door and inviting the singer inside, Prince Harry said, "It's like looking in a mirror". The short video ended teasing, "Tomorrow 10th October".

As soon as the Duke uploaded the clip on the picture-video sharing platform, fans started flooding the comment section with comments expressing their excitement on seeing the two come together.

Sheeran's collaboration comes over a month after he announced that he would be taking an 18-month break. At the end of his Divide tour earlier this week, the Grammy winner told the crowd in Ipswich, England that, "As you may or not know, I have been on the Divide tour for over two years now and this is the last day of the whole thing. There is something very bittersweet about it."

"I love that you guys are here and we are ending it in Ipswich. This is my last gig for probably 18 months. We've played all around the world. Glastonbury, Wembley Stadium. All these amazing venues, America, New Zealand, Australia, Asia, South America--it's been a wild one," he continued according to The Sun, reported news agency.

"It kind of feels like you are breaking up with a girlfriend that you have been with for years. It sounds odd but it has been a long tour," he said emotionally.

Before biding the final goodbye, he expressed his appreciation to the people who were involved in making his tour successful."Thank you to everyone who has given me a chance. This is my last song. I wrote this when I was 15 years old. See you in a few year's time. Thank you," he said.