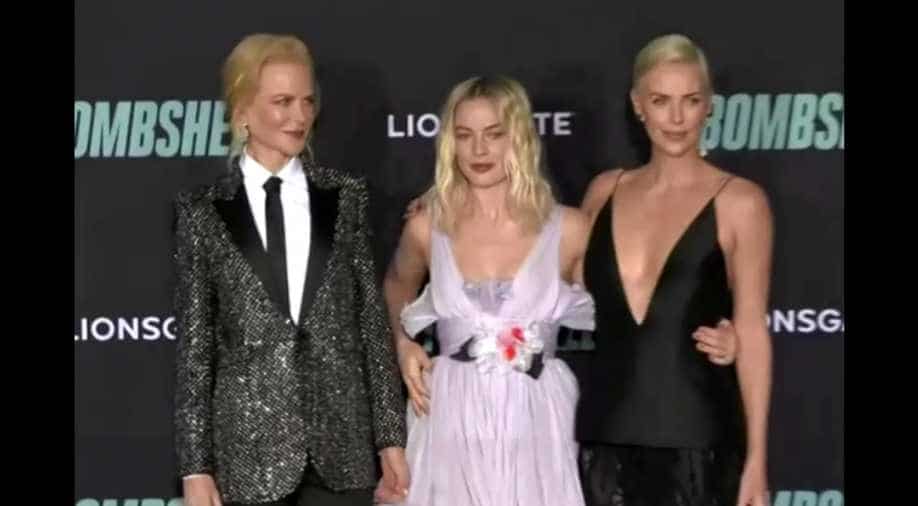 'Bombshell' goes on release in Los Angeles and New York on December 13 before going nationwide in the US a week later. Photograph:( Reuters )

The three lead actresses of 'Bombshell', Nicole Kidman, Charlize Theron and Margot Robbie, teamed up a day after both Theron and Robbie were nominated for their roles at the Golden Globes.

The three lead actresses of 'Bombshell', Nicole Kidman, Charlize Theron and Margot Robbie, teamed up on Tuesday night (December 10), a day after both Theron and Robbie were nominated for their roles at the Golden Globes.

The film focuses on the sexual harassment claims against Fox News chief Roger Ailes by female presenters, including Gretchen Carlson (Kidman) and Megyn Kelly (Theron). Robbie's character, Kayla Pospisil, is an amalgamation of several other presenters who made similar claims.

The accusations happened a year before the #metoo and Time's Up scandals that electrified Hollywood in 2017.

Theron, who was the producer of the film, told Reuters "When this story broke it was only the tip of the iceberg and then two years later we find ourselves with all these allegations of so many men in powerful positions taking advantage of that position but that wasn't the case when this story broke so I feel like we're gradually exposing that giant piece of ice underneath and I think there's going to be more. I think we've started something that's ignited a conversation and a need for women to really share their truth that is unstoppable right now."

Although Carlson and Kelly's harassment claims in the film are historic, Pospisil's are featured at the end of Ailes' career at Fox News.

Asked if there was light at the end of the tunnel for sexual harassment in the workplace, Robbie replied, "In the instance of Fox News and Hollywood with Roger Ailes breaking and Harvey Weinstein breaking and all the ones that happened in between - they both exist in an industry that has a public platform and a voice that can be projected to the world more readily than a lot of other industries so I think there's still so much that needs to be fixed and acknowledged, particularly in other industries that don't have that public platform."

Despite the fact the film is about female empowerment, the film is directed and written by men. Jay Roach, who directed the film, said, "The reason she said we should do it together as a man and woman or as men and women is that that's probably what's going to have to happen to help fix these situations." He added, "It would be so cool if men joined in the fight a little more and also, it's simple things like trusting women to believe the accusers as a default position so that when you hear something, you go 'Oh I'd like to hear her story' as opposed to 'I don't believe her story'."

Theron hit the headlines when her performance as Megyn Kelly was revealed in the first trailer. However, her uncanny resemblance also caused issues on set.

Writer Charles Randolph said "You're sitting on set and she says something and you look over to respond and suddenly Megyn Kelly is looking back at you. Oh god, that's crazy."

But Theron isn't the only actor who underwent a transformation. John Lithgow is almost as unrecognizable as Roger Ailes and said his wife wouldn't talk to him for a few hours after seeing the film for the first time, as she found it so disturbing.

He said "You get yourself all done up and you look in the mirror and you're so startled by the sight of yourself, it's good. It takes you out of the sense of yourself. I felt like a big sloppy man."

'Bombshell' goes on release in Los Angeles and New York on December 13 before going nationwide in the US a week later.