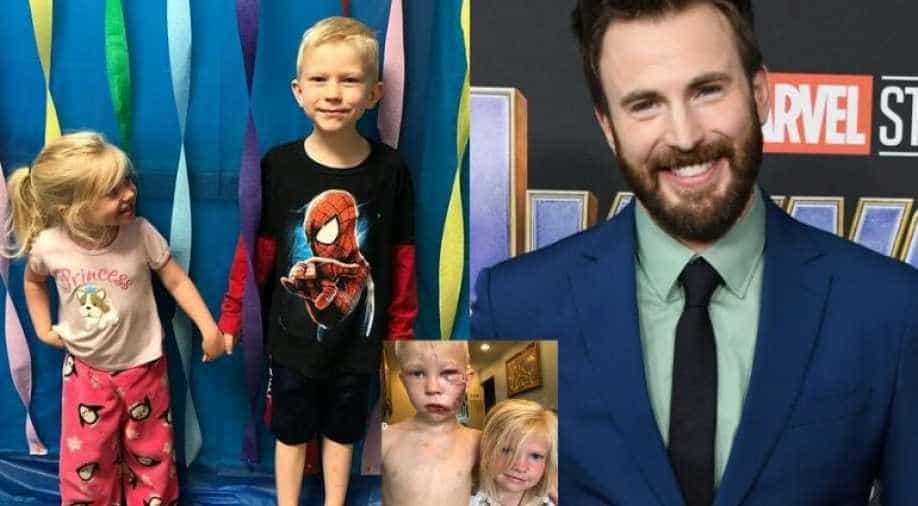 Bridger's heroic deed went viral after his aunt Nikki Walker shared the story on Instagram and tagged the Avengers stars, who Bridger idolises.

Amid the gloom, uncertainty, and despair- here's something that will instantly bring a smile on your face. Hollywood stars Chirs Hemsworth, Chris Evans, Mark Ruffalo, and Tom Holland have hailed six-year-old Bridger Walker's heroic act of saving his little sister from a dog attack.

Bridger's heroic deed went viral after his aunt Nikki Walker shared the story on Instagram and tagged the Avengers stars, who Bridger idolises.

Hey, all. Please, share my nephew’s story so that it gets as much exposure as it can. We know that our little hero would love some words of encouragement from his favorite heroes. On July 9th, my six year old nephew Bridger saved his little sister’s life by standing between her and a charging dog. After getting bit several times on the face and head, he grabbed his sister’s hand and ran with her to keep her safe. He later said, “If someone had to die, I thought it should be me.” After receiving 90 stitches (give or take) from a skilled plastic surgeon, he’s finally resting at home. We love our brave boy and want all the other superheroes to know about this latest hero who joined their ranks. @tomholland2013 @chrishemsworth @robertdowneyjr @markruffalo @prattprattpratt @twhiddleston @chadwickboseman @vindiesel @chrisevans EDIT: I just finished visiting with Bridger at his home. His wounds are looking so much better! He’s in great spirits, and his awesome personality is intact. He can’t smile too widely yet, but he was grinning as I read some of your comments to him. I’d also like to mention here that the dog’s owners are really great people who have been nothing but kind to Bridger and his family. We feel no resentment toward them at all, and—if anything—there’s only been an increase of love between our families as a result of this incident. EDIT 2: Once again we’re blown away by the amazing comments and messages that Bridger’s receiving. I’ve had lots of inquiries about a GoFundMe. Bridger’s family has asked that any one wishing to help out financially can, instead, donate to @mission_22 or @wwp. Bridger is also a huge fan of Science, especially Geology. So I’m going to start a post where people can share with him pictures of cool rocks that they see. EDIT 3: Once again, everyone’s kindness has meant so much to us. I’m trying to get to all of the messages that I can, but it may take some time. For those who have inquired about sending Bridger some rocks, here’s the address to use: Bridger Walker P.O. Box 22141 Cheyenne, WY 82003 #BridgerStrong

Bridger came between a dog and his sister and was bit by the animal on his cheek and head. The little boy had to get 90 stitches at the hospital and the entire procedure took around 2 hours to finish.

The Walker siblings had gone over to a neighbour's house and one of their dogs came at Bridger's sister. Bridger jumped in between in order to save his little sister. He later told his parents, "If someone had to die, I thought it should be me."

Moved by his heroic deed Hemsworth, Evans, Ruffalo and Jeremy Renner send him warm wishes and inducted him as part of the Avengers. Evans even sent him Captain America's costume and the shield along with an encouraging video message.

There are no words. We are so, so thankful.

His aunt has been updating social media about Bridger's progress and the number of celebrities that have reached out to Bridger to praise him. Another post by Nikki Walker shows Bridger dressed in Spider-Man costume and chatting on video call with actor Tom Holland who plays the superhero on screen.

Walker shared photos of Bridger and his little sister before the attack – as well as the photos of his facial injuries after the incident. The boy's face appears cut from his lip up his cheek and is covered in stitches. It is also swollen and bruised.

While Bridger is unable to fully smile due to his injuries, the little boy has been very happy with all the love and adulation that has come his way. Many offered financial assistance to his parents who have appealed them to donate to certain charities instead.