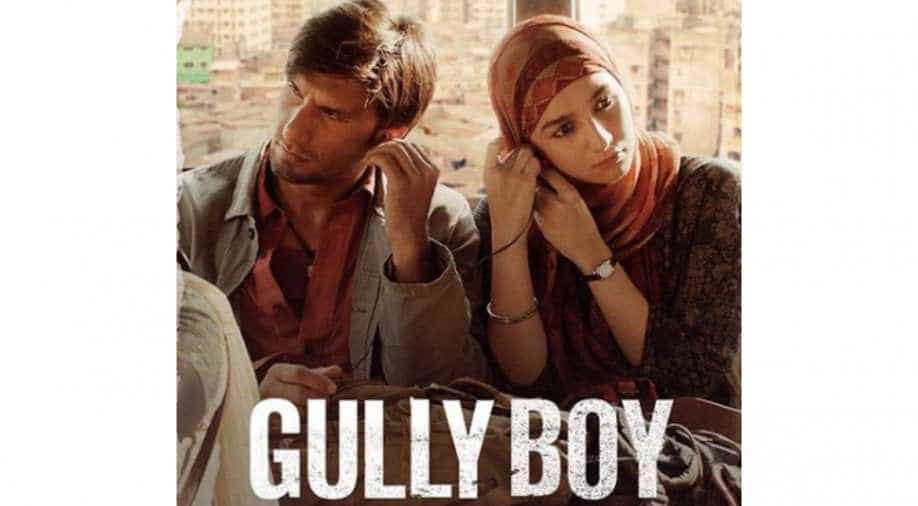 A poster of the film 'Gully Boy'. Photograph:(Twitter)
Follow Us

Both Alia and Ranveer don a fresh look for their next film together 'Gully Boy' as they shared the poster on their social media profiles.

With the advent of the new year, Ranveer Singh and Alia Bhatt shared fresh new posters of their upcoming film ‘Gully Boy’. Directed by Zoya Akhtar, the film will follow the story of a young Mumbai street rapper, inspired by the life of Divine and others who are like him. See pictures from their shoot wrap-up party!

The first poster introduces Ranveer Singh, with his back facing the camera as he looks forward at a building. The foreground has musical notes and lyrics written as the film’s tagline reads: “Apna time aayega (Our time will come).”

In the second poster, Ranveer's face is visible as he listens to music with earphones plugged in. In the third and last shared recently, both Ranveer and Alia's characters can be seen -- with them adjusting their earphones as they share music while travelling on a train.

Earlier last year, some pictures from their shoot leaked out with fans going crazy after seeing Alia and Ranveer in a different avatar -- something not seen before.

In a previous interview, when Divine was asked whether he felt that Ranveer would do a good job of his life story, he said, “Ranveer is the man,” and added, “He’s the best man to do the movie and he’s killed it.”

‘Gully Boy’ will be screened in the Berlinale Special section of the Berlin Film festival, which will be held between February 7 and 17, 2019.

Co-produced by Farhan Akhtar and Ritesh Sidhwani’s Excel Entertainment, ‘Gully Boy’ will be released on February 14, 2019.