'Kalank' star Aditya Roy Kapur to WION: I plan to be doing more films, being on set again 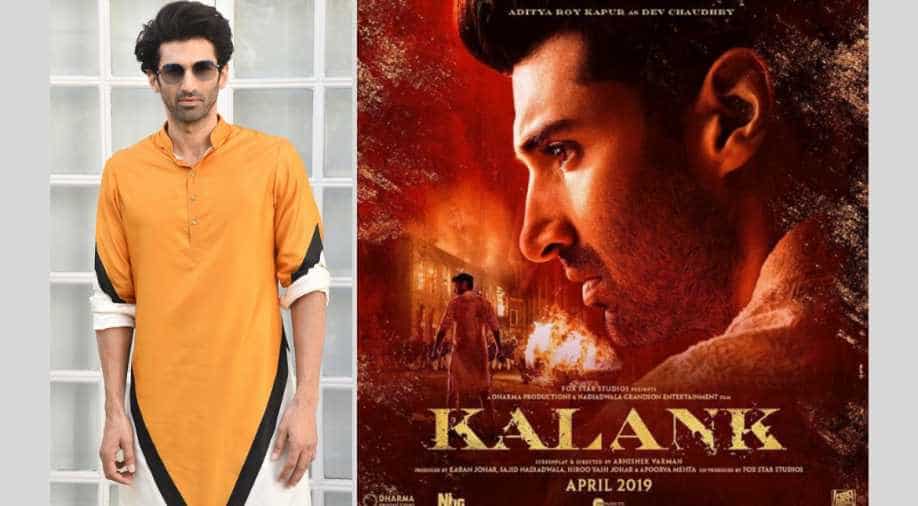 Aditya Roy Kapur got into a conversation with WION about ‘Kalank’, why we don’t see him in films very often and how he never intends to distance himself from his character of ‘Aashiqui 2’. He came to New Delhi for the promotions of his film with the others from the cast.

The first quarter of 2019 has majorly been about biopics and nationalism in films. Offering a break from this, Karan Johar’s ‘Kalank’ helmed by Abhishek Verman will release on April 17 with an ensemble cast starring Madhuri Dixit, Sanjay Dutt, Alia Bhatt, Aditya Roy Kapur, Varun Dhawan and Sonakshi Sinha in important roles. See the trailer here.

A period-drama film that has love at its focal point, it will see Alia and Varun reunite as lovers, Sanjay and Madhuri come together on the screen after a gap of 20 years and a fresh new pairing of Aditya and Sonakshi.

Aditya Roy Kapur who plays the role of Dev Chaudhry in a film that finds its story in a pre-independence India that was at the brink of partition, got into a conversation with WION about ‘Kalank’, why we don’t see him in films very often and not ever distancing himself from his character from ‘Aashiqui 2’. He came to New Delhi for the promotions of his film with the others from the cast.

Aditya will be seen on the screen after a long gap of two years. He rose to success with ‘Aashiqui 2’ but didn’t quite go on to pick many films post that. When asked why we don’t see him more often in films, he said, “Maybe you will. I'll make amends for that. I hope I'm not asked this question again, honestly I'm the happiest when I'm shooting a film and I’m on a set. I plan to be doing more films, being on set again. Just after my last film, I wasn't excited about anything and I can't get myself to do it if I'm not convinced. But I’m happy that I'm convinced about the stuff that I’m doing now and hopefully you will see me more.”

Lighting the screen, as seen in the trailer, with both Sonakshi Sinha and Alia Bhatt in different capacities, Aditya revealed that ‘Kalank’ is not a love story but a “story about love.” Elaborating on how the love of a pre-independence era could still be relevant today, he said, “Love is eternal. People have been writing songs and poems since the time of Adam and Eve, cut across time.”

Madhuri Dixit supported this thought and added, “Generations can change but the emotions will still remain the same. Past often forms your future.”

After a breakout role in ‘Aashiqui 2’, Aditya has not been able to distance himself from the role of a boy-next-door in the minds of the audience. On the love he got for that film, he said, “I think that film seems to have made quite an impression on people. I feel very privileged, to have portrayed a character that has had such an impression on people. I would never distance myself from that, I would hopefully be able to bring more characters that can make the same impression. I would hope that Kalank would do that.”

He also spoke about actors experimenting with their craft as he said that it's a great time in the industry where the audience is expecting different things. “In the last year I think we did some good stuff, we are getting so much variety, I don't think anyone is sticking to what is safe.”

With many also comparing the look and feel of ‘Kalank’ to that of previous films by ace director Sanjay Leela Bhansali, Aditya said, “It's something to be flattered about. Abhishek, I think, has always been a fan of Sanjay Leela Bhansali but whatever feedback I have heard, they have said that we are seeing a film like this after a long time, so it's got an identity of itself. When you watch it as a viewer, you will realise.”

Madhuri also added to this line of thought and said, “I have worked with Abhishek and Sanjay before, I think when you talk of an era, of a period, when you are trying to create a spectacle on screen, the elements are very similar, story and its characters are very different.” Alia Bhatt, who was also present at the promotions said that Sanjay Leela Bhansali has created a genre of his own, so when anybody attempts it in their own way even though the story would be completely different, people always end making comparisons.