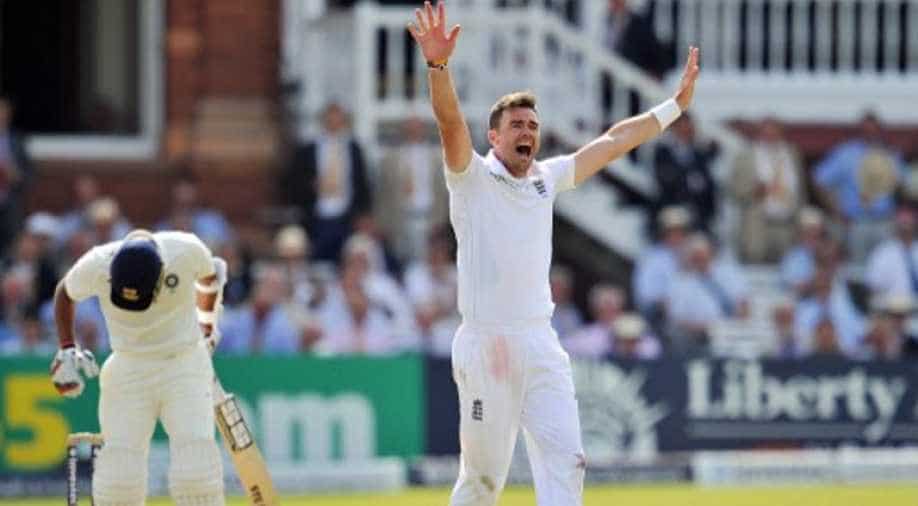 Jimmy Anderson, who has recuperated from a shoulder injury, had played a crucial role during England's Test series win the last time they visited India. Photograph:( AFP )

Captain Alastair Cook on Saturday hailed top bowler Jimmy Anderson's surprise return from injury as he insisted England would revel in their status as underdogs during their tour of India.

Cook said that Anderson, England's all-time leading Test wicket-taker with 463 scalps, had been given the all-clear following a shoulder problem and could arrive in India as early as Tuesday.

"It's really good news. He's ready to come so it's just about trying to get him out to Rajkot as quick as we can," Cook, 31, told reporters in Mumbai.

The first Test of the five-match series starts in Rajkot, in western Gujarat state, on Wednesday as India seek revenge for a home series loss to England four years ago.

The powerful Anderson will miss the opening Test but could be ready to lead England's attack for the second match, which starts in Andhra Pradesh state, on November 17, said Cook.

Anderson suffered a fractured shoulder blade last summer and had been dogged by a recurrence of the injury but passed fitness tests back home on Friday while the rest of the England squad were already training in India.

"I was chatting to him yesterday and the second Test is a good possibility. We'll know when we see how his body reacts when he's out here," said the skipper.

Anderson took more wickets than any other pace bowler on either side when England won the 2012 series in India and Cook believes the fired-up 34-year-old could be the difference again.

"He's worked incredibly hard to get back and has come back so much quicker than we thought.

"He's up for it and is not just coming here to make up the numbers so that's great for us. He wants to make a difference in this series," Cook told a post-training press conference.

India are number one in the world and have not lost a Test series at home since left-handed batsman Cook expertly led England to a 2-1 victory four years ago.

England's spin attack is weaker than it was back then when Graeme Swann and Monty Panesar excelled on Indian soil but Cook is confident that his side can spring a surprise.

"Unfortunately we haven't quite got that experience of probably top quality spinners. (But) Mo (Moeen Ali) has been very successful against India in the past.

"Rash (Adil Rashid) has done very well in One Day Cricket and we probably haven't seen the best of him in Test cricket yet.

"(So) we've actually got more options in this squad than we did in the last squad," he said.

Cook warned critics not to write off his team even if they do lose in the opening Test recalling his side's heroics the last time they toured India.

"I remember sitting in a press conference after the first Test and everyone was talking about how you're going to stop India winning 4-0 and we managed to turn it around and win 2-1. It shows that anything is possible."

England are looking to bounce back from a humiliating defeat to minnows Bangladesh last week and Cook believes that being underdogs, rather than favourites, will work in his side's favour.

"We're under no illusions about how hard it could be but being an underdog takes a lot of pressure off us," said Cook.