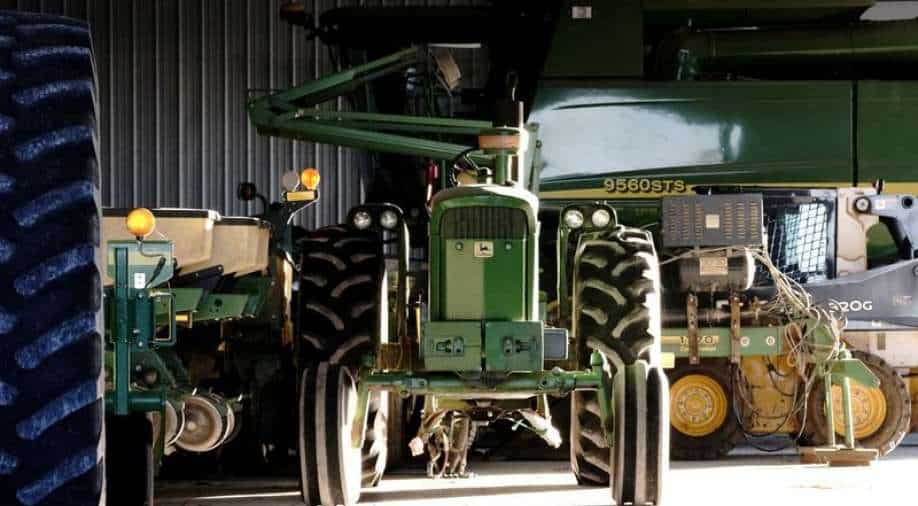 Heavy machinery sit inside a barn on a corn and soybean farm in US Photograph:( Reuters )

The Commerce Department's snapshot of fourth-quarter gross domestic product on Thursday also showed the recovery from the pandemic losing steam as the year wound down amid a resurgence in coronavirus infections and exhaustion of nearly $3 trillion in relief money from the government.

The US economy shrunk by 3.5 per cent last year as COVID-19 ravaged services businesses like restaurants and airlines, throwing millions of Americans out of work and into poverty.

It was the biggest contraction of the world's largest economy since 1946, the Commerce Department said on Thursday.

For the fourth quarter alone, GDP grew by an annual rate of 4.0 per cent, according to the first estimate for the final three months of the year.

Compared to the July-September period, the measure used in most other countries, fourth quarter growth was just 1.0 per cent, the report said.

That followed the record 7.5 per cent rebound in the third quarter, and the record 9.0 per cent drop in the April-June period.

The Commerce Department's snapshot of fourth-quarter gross domestic product on Thursday also showed the recovery from the pandemic losing steam as the year wound down amid a resurgence in coronavirus infections and exhaustion of nearly $3 trillion in relief money from the government.

The Federal Reserve on Wednesday left its benchmark overnight interest rate near zero and pledged to continue injecting money into the economy through bond purchases, noting that "the pace of the recovery in economic activity and employment has moderated in recent months."

President Joe Biden has unveiled a recovery plan worth $1.9 trillion, and could use the GDP report to lean on some lawmakers who have balked at the price tag soon after the government provided nearly $900 billion in additional stimulus at the end of December.

The economy contracted 3.5 per cent in 2020, the worst performance since 1946. That followed 2.2 per cent growth in 2019 and was the first annual decline in GDP since the 2007-09 Great Recession. The economy plunged into recession last February.

In the fourth quarter, GDP increased at a 4.0 per cent annualised rate as the virus and lack of another spending package curtailed consumer spending, and partially overshadowed robust manufacturing and the housing market. GDP growth for the last quarter was in line with forecasts in a Reuters poll of economists.

With the virus not yet under control, economists are expecting growth to further slow down in the first quarter of 2021, before regaining speed by summer as the additional stimulus kicks in and more Americans get vaccinated.

The stars of the recovery have been the housing market and manufacturing as those who are still employed seek larger homes away from city centers, and buy electronics for home offices and schooling. Manufacturing's share of GDP has increased to 11.9 per cent from 11.6 per cent at the end of 2019.