UK jobs market shines, but clouds on the horizon 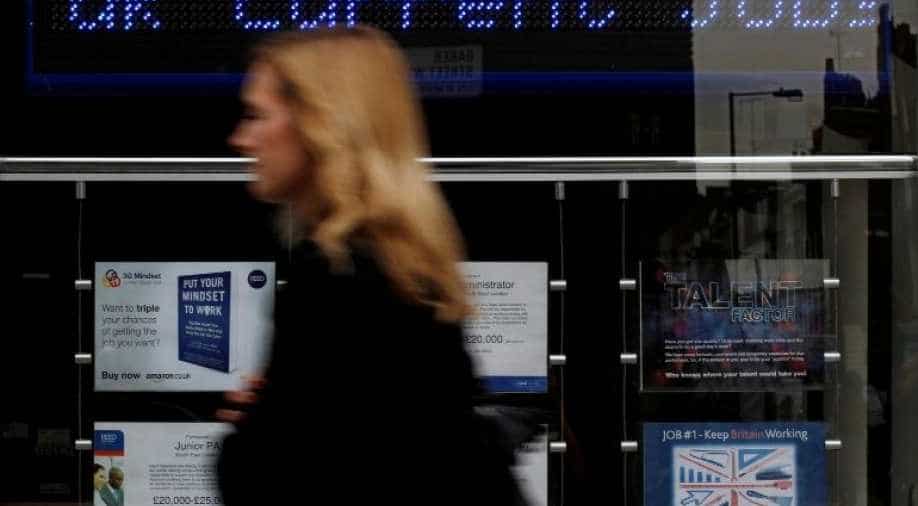 A pedestrian walks past an employment centre in London. Photograph:( Reuters )

Tuesday's figures showed Britain created 115,000 jobs in the second quarter, bringing the level of employment to a record 32.811 million, the Office for National Statistics (ONS) said.

Britain's labour market showed unexpected strength in the second quarter, in sharp contrast with figures last week that showed the economy contracted over the same period as the country gears up for Brexit.

Total earnings growth including bonuses rose by an annual 3.7 per cent in the three months to June - the highest rate since June 2008 and up from 3.5 per cent in May, and line with forecasts in a Reuters poll of economists.

The jobs market has been a silver lining for the economy since the Brexit vote in June 2016, something many economists have attributed to employers preferring to hire workers they can later lay off rather than making longer-term commitments to investment.

Tuesday's figures showed Britain created 115,000 jobs in the second quarter, bringing the level of employment to a record 32.811 million, the Office for National Statistics (ONS) said.

"The jobs market remains a source of strength for the UK economy, though it may now be reaching its peak," said Tej Parikh, chief economist at the Institute of Directors.

Sterling showed little reaction to the data, which tends to lag broader trends in the economy and had also appeared healthy in the lead-up to the financial crisis.

Excluding bonuses, annual pay growth picked up to 3.9 per cent from 3.6 per cent, the ONS said, compared with the poll forecast for growth of 3.8 per cent.

A little of the strength in the pay data reflected the unusual timing of annual pay rises for public health workers in 2018 when a larger-than-normal increase was deferred until July.

Some details pointed to tougher times ahead after data last week showed the economy unexpectedly shrank by 0.2 per cent in the three months to June.

The unemployment rate rose to 3.9 per cent, against expectations for it to hold steady 3.8 per cent, and while employment growth far exceeded forecasts, part-time rather than full-time jobs accounted entirely for the increase.

Output per hour, the headline measure of productivity, fell 0.6 per cent in annual terms - the fourth quarter of decline in a row and the longest such run since mid-2013.

Poor productivity is one of Britain's biggest economic challenges and, until recently, had contributed to a decade of weak pay growth.

The number of job vacancies, an indicator of future employment, fell to 820,000 in the three months to July from 824,000 in the period to June, the lowest level in more than a year.

Some recent surveys of companies have suggested employers are turning more cautious about hiring as new Prime Minister Boris Johnson has pledged to take Britain out of the European Union on October 31, with or without a deal.

The Bank of England said this month it saw signs of a softening in labour market indicators.