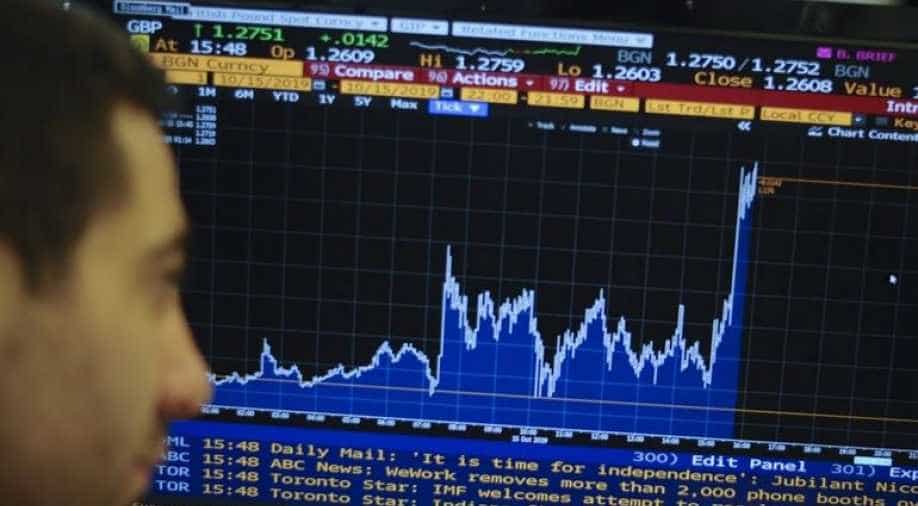 A journalist poses while looking at a computer screen with the Bloomberg display showing a rise in the value of the pound sterling against the US dollar in London Photograph:( AFP )

Sterling came off five-month highs and stocks traded sideways on Wednesday in the backdrop of Brexit.

Sterling came off five-month highs and stocks traded sideways on Wednesday as the European Union and Britain sought to avert a disorderly Brexit before an EU summit on Thursday.

Hopes of a breakthrough lifted markets on Tuesday, but investors turned more cautious after looking for a deal during the night that never came.

Conflicting reports about the ongoing talks triggered a series of sharp moves on the pound. Reports that Germany might use emergency measures to counter any market panic from a hard Brexit, such as banning bets on falling share prices, also weighed on morale.

"Most of the good news that could have been anticipated has been priced in, and now there's caution it seems on whether we get a deal today or not," said Kallum Pickering, senior economist at Berenberg.

Sterling was down by 0.4 per cent against the dollar with investors trading volatility levels not seen since the 2016 June Brexit referendum.

The pound had strengthened by close to 5 per cent over the past week as investors rushed to reprice the prospect of a last-minute Brexit deal before the October 31 deadline.

German 10-year government bond yields were last flat at -0.42 per cent, after reaching an 11-week high of -0.397 per cent as Bunds extended a sell-off that began on Tuesday.

British government 10-year bond yields were down 2.7 basis points at 0.67 per cent, unaffected by data showing inflation in September reached 1.7 per cent year-on-year, below market expectations.

Earlier, shares rose in Asia. MSCI's broadest index of Asia-Pacific shares outside Japan gained 0.5 per cent. MSCI's gauge of stocks across the globe was flat.

"Even though we are most optimistic that a deal does happen, we don't think the most likely outcome is that it happens by October 31, so you would be looking at some form of extension and potentially elections," said, Andrew Sheets, chief cross-asset strategist at Morgan Stanley.

Third-quarter earnings are expected to show an overall decline in earnings, which could also weigh on morale, Sheets said. Morgan Stanley had a below-consensus view on how companies would fare this quarter, he said.

Europe's companies are struggling with uncertainties ranging from Brexit and the US-China trade war to Germany's manufacturing recession.

Companies listed on the STOXX 600 index are now expected to report a decline in third-quarter earnings of as much as 3.7 per cent, worse than the 3 per cent expected a week ago, according to I/B/E/S data from Refinitiv.

Bloomberg reported, citing sources, that China will struggle to buy $50 billion of US farm goods annually unless it removes retaliatory tariffs on American products, which would require reciprocal action by US President Donald Trump.

The US-China trade war will cut 2019 global growth to its slowest pace since the 2008-2009 financial crisis, the International Monetary Fund warned on Tuesday.

Global gross domestic product is now expected grow 3 per cent in 2019, the IMF said its latest World Economic Outlook projections, down from 3.2 per cent in a July forecast, largely because of global trade friction.

US stocks, which typically track the ups and downs of the trade war, were set to open in the red. S&P 500 futures and Nasdaq futures were both down 0.3 per cent.

In commodities, Brent crude shed about 0.1 cent to $58.66 a barrel. US crude rose 10 cents to $52.91 after falling the day before over fears the trade war would keep squeezing the global economy.

In emerging markets, Turkey's Halkbank saw its shares and bonds plunge after US prosecutors charged the state-owned lender with taking part in a multibillion-dollar scheme to evade US sanctions on Iran. A day earlier, Washington had imposed sanctions on Turkish officials, raised tariffs and halted trade talks after Turkey invaded northeastern Syria in a campaign again Kurdish fighters. Before Turkish markets opened, authorities banned short selling on seven large Turkish bank stocks, including Halkbank. Selling shares in the banks only to buy them later in the session was also banned, authorities said.