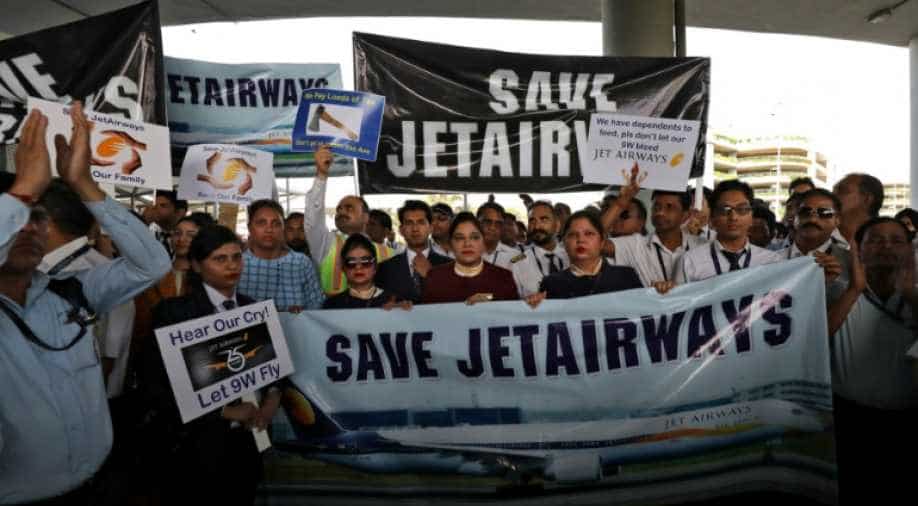 Around 22,000 employees of Jet Airways on Thursday sought the intervention of Prime Minister Narendra Modi in saving the airline, which has not been able to pay the salary to its pilots and engineers for the last three and a half months.

The employees of debt-ridden airline demonstrated at Mumbai headquarters of the Jet Airways to press for their demand. The protesting employees blocked the gate of the airline's office.

NCP leader and Jet Airways Officers and Staff Association (AIJOSA) president Kiran Pawaskar is at Mumbai headquarters to meet the management of the airline at its Andheri headquarters.

"Over 16000 employees are without work today and close to 6000 more employees are attached to the company. Seems There is no job security in the aviation sector, earlier Kingfisher, Damania Airways, Modiluft there is so much shut down in the sector. I have written a letter to PM Modi, FM Jaitley, Nitin Gadkari Ji to intervene. There are employees in the age group 45-50, no other airline will employ them. Management says that there is no finance to run company. After  May 10 bidding process we will get to know if operations will commence," said Kiran Pawaskar.

"Why isn’t govt giving money to the airline that can survive.PMO can intervene, as all banks are finally under that govt. The aviation industry is being run by the ministry, they should help." he added.

"DGCA (Directorate General of Civil Aviation) would endeavour to do its best to help the company revive its operations within the set regulatory framework," the regulator said in a statement.

Lenders are carrying out the bidding process for stake sale in the ailing airline, which has a debt burden of more than Rs 8,000 crore.

If Jet fails to attract a buyer and collapses that would put thousands of Jet's employees out of jobs, many of whom have been unpaid for weeks or months, and affect thousands of others whose jobs are tied to the fortunes of the airline.