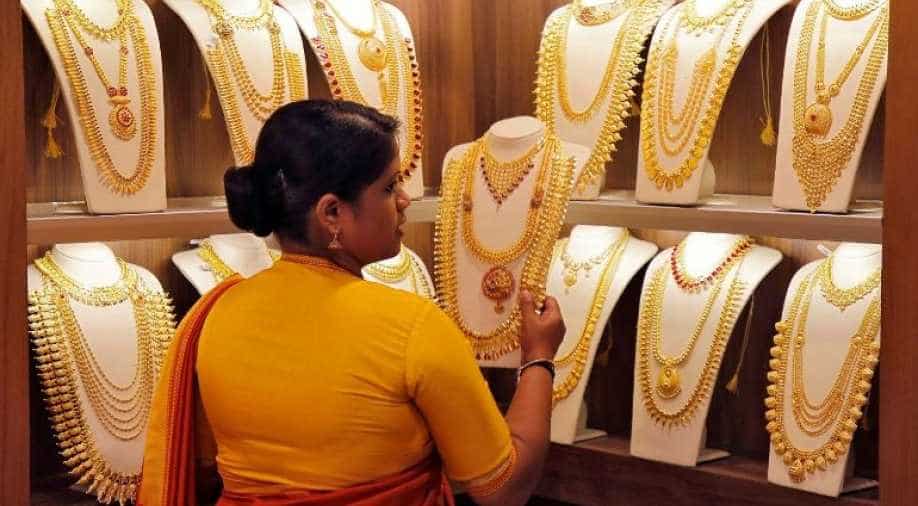 A saleswoman picks gold necklaces to show it to a customer inside a jewellery showroom on the occasion of Akshaya Tritiya, a major gold buying festival, in Kochi, India. Photograph:( Reuters )

The fall in consumption in the world's second-biggest market of the metal could brake global prices, up 17 per cent so far in 2019.

India's gold demand is expected to fall to its lowest level in three years in 2019, the World Gold Council (WGC) said on Tuesday, as domestic prices climb to a record against a backdrop of falling earnings in rural areas, a key source of custom for the precious metal.

Gold demand in 2019 could drop 8 per cent from a year ago to around 700 tonnes, the lowest since 2016, said Somasundaram PR, the managing director of WGC's Indian operations. In a report, the WGC said India's gold consumption in the quarter ended September slumped nearly a third from a year ago to 123.9 tonnes.

The fall in consumption in the world's second-biggest market of the metal could brake global prices, up 17 per cent so far in 2019, but a drop in imports could also help ease the country's trade deficit, supporting the rupee.

Two-thirds of India's gold demand comes from rural areas, where jewellery is a traditional store of wealth.

India received its highest monsoon rainfall in 25 years during the June-September season, with rains continuing even in October, damaging summer-sown crops such as cotton, soybeans and pulses ready for harvesting.

In September, local gold futures hit an all-time high of 39,885 rupees per 10 grams. They have risen about 22 per cent so far in 2019, tracking a rally in global prices as well as reflecting a depreciation in the rupee.

A spike in domestic gold prices and a hike in the import duty slashed demand during the July-September, the WGC said. In the first week of July, India raised the import duty on gold to 12.5 per cent from 10 per cent.

In the key quarter ending December 31, demand is likely to be lower than last year's 236.5 tonnes, Somasundaram said, but the drop is unlikely to be as steep as in the July-September quarter.

Demand usually rises in the October-December quarter due to the wedding season and festivals such as Diwali, when buying bullion is considered auspicious.

Many Indians are using the rally in prices to liquidate their gold ornaments, the WGC official said, forecasting scrap gold supplies in India could jump 38 per cent in 2019 to around 120 tonnes.