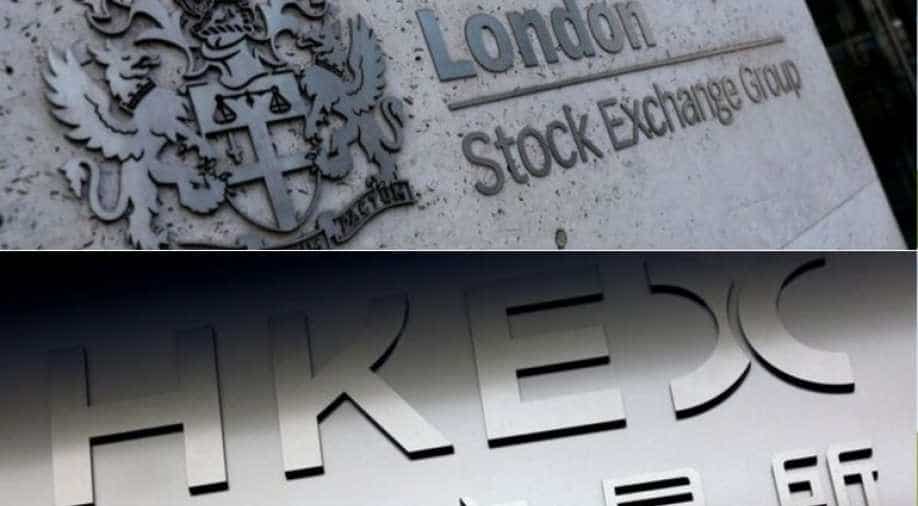 The Hong Kong exchange said it would now hold more talks with LSE investors as it considers its next step, aiming to keep alive its hopes of becoming a more global player to rival US giants ICE and CME.

Hong Kong's exchange refused to give up on its bid to take over the London Stock Exchange after the British bourse emphatically rejected its $39 billion takeover offer on Friday.

The Hong Kong exchange said it would now hold more talks with LSE investors as it considers its next step, aiming to keep alive its hopes of becoming a more global player to rival US giants ICE and CME.

"HKEX believes that shareholders in LSEG should have the opportunity to analyse in detail both transactions and will continue to engage with them," it said in a statement.

The LSE said earlier on Friday, as it rebuffed the Hong Kong approach, that it was sticking with its $27 billion acquisition of data and analytics company Refinitiv - a deal that the HKEX offer had required the London exchange to abandon.

It told HKEX in a letter that it had fundamental concerns about key aspects of its takeover proposal which it said had no strategic merit, and that HKEX's relationship with the Hong Kong government would "complicate matters".

HKEX's valuation of the LSE falls "substantially short" and the "ongoing situation in Hong Kong" adds to uncertainty for shareholders, the London bourse added, a reference to weeks of pro-democracy street protests in the former British colony.

"Accordingly, the board unanimously rejects the conditional proposal and, given its fundamental flaws, sees no merit in further engagement," the LSE said in a statement.

HKEX, Hong Kong Exchanges and Clearing, said it was disappointed the LSE has refused to "properly engage" in a compelling proposal.

A source close to HKEX added the quick dismissal of the surprise offer, announced on Wednesday, meant the Hong Kong bourse had very little time to discuss their proposal with investors, a sentiment echoed by some shareholders.

"As shareholders in LSE, it's difficult to evaluate the merits of a combination with HKEX as we have been given no information on potential synergies," said James Bevan, chief investment officer at CCLA, which holds a small stake.

LSE shares, however, rose on the news of the offer rejection and closed up 2.73 per cent at 7,450 pence.

LSE's blunt rejection letter said the Hong Kong offer did not meet its strategic objectives. It said it was sticking with its core strategy of expanding into data with the Refinitiv deal, rather than taking a "significant backward step" by bulking up on market transactions in the HKEX proposal.

The LSE also said a Hong Kong takeover could well be rejected by regulators or governments in Britain, the United States, and Italy. HKEX's assertion that implementing the deal would be swift and certain "is simply not credible", it added.

The LSE also owns the Milan exchange and has a significant American presence through its FTSE Russell index subsidiary and LCH, its derivatives clearing house which dominates the US dollar swap market.

HKEX added on Friday that it had held initial constructive discussions with regulators and policymakers. But a regulatory source in Britain said no substantive discussions had been held on the proposed deal so far.

The flat rejection indicates HKEX boss Charles Li is unlikely to win the LSE board round with an improved financial offer, meaning he may have to go hostile if he wants to persist. He would need to launch a major charm offensive with investors to convince them the LSE board is wrong.

However, a source close to the LSE said even if the cash component of HKEX's cash-and shares offer was raised, it would increase the risk for a combined group by piling on more leverage.

The source said a higher bid by the Hong Kong exchange or going hostile was unlikely to succeed because its proposal was "just too weak on every fundamental point".

A deal will be also challenging given the troubled history of big exchange mergers, combined with Hong Kong's current unrest.

The industry has been littered with attempts at cross-border tie-ups for over a decade as profits from the traditional business of running stock markets and clearing houses have fallen. But proposed deals have collapsed in the face of regulatory and political opposition to core parts of a country's financial system falling into foreign hands.

This has pushed exchanges to look for related businesses for growth, with the likes of LSE and New York Stock Exchange owner ICE driving into more profitable and less politically sensitive areas like data and analytics, where revenue is rising.

"This (rejection) certainly makes it clear that even if the HK exchange were to reconsider the terms of the transaction, it shows fundamentally the LSE board would prefer to go down the Refinitiv route," said Michael Werner, an analyst at UBS.

HKEX made its offer just two days after its officials travelled to London to present it to LSE Chief Executive David Schwimmer for the first time. It has been coolly received by shareholders on both sides so far.

Analysts said a perception that Beijing is exerting growing influence over Hong Kong was a key sticking point for an LSE takeover, given the Hong Kong government's close links with the HKEX. The Hong Kong government is the biggest shareholder in HKEX, with a 6 per cent stake and approves six of the 13 board members.

Hong Kong is entering a fourth month of sometimes violent protests sparked by legislation that would have drawn the former British colony closer to the Chinese legal system.

Fitch Ratings said, before the LSE's rejection of the offer, that "increasing control by Chinese authorities over Hong Kong" could raise regulatory concerns in Britain and the United States about data and information security.

HKEX, for its part, had touted the deal as providing London with a major gateway to the Chinese economy, but the LSE said HKEX did not provide the best long-term option.

"We value our mutually beneficial partnership with the Shanghai Stock Exchange which is our preferred and direct channel to access the many opportunities with China," the LSE said.

The LSE and Shanghai have recently launched a share trading link.

Earlier on Friday, ahead of the rejection, HKEX boss Li told Reuters that his proposal was one about boosting the long-term fortunes of both exchanges.

"Whoever can come up with a system that either allows money to go into China or allow the Chinese money to come out is going to really, really transform global financial markets."