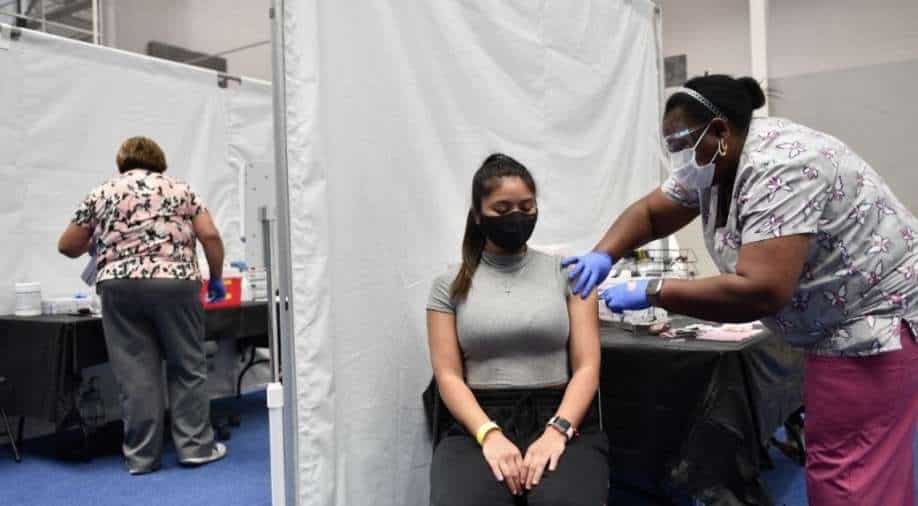 Covid vaccination in the US (representative image). Photograph:( AFP )

This represents an increase of more than 60 per cent over the 15-month period prior to the pandemic, the bank said on Monday.

In its largest-ever crisis response, the World Bank has deployed over $157 billion to fight the impact of the COVID-19 pandemic on health, economic and social fronts over the last 15 months.

This represents an increase of more than 60 per cent over the 15-month period prior to the pandemic, the bank said on Monday.

"We will continue to provide critical assistance to developing countries through this ongoing pandemic to help achieve a more broad-based economic recovery," he said.

The Bank Group has proven to be a rapid, innovative, and effective platform to support developing countries as they respond to the pandemic and strengthen resilience for future shocks, Malpass said.

"But we must still do more," he said, adding that he remains deeply concerned about the limited availability of vaccines, which are critical to saving lives and livelihoods, for developing countries.

According to a press release, support to countries from the International Bank for Reconstruction and Development totalled $45.6 billion, including drawing down IBRD's $10 billion crisis buffer in addition to the board-approved sustainable annual lending limits.

Grants and zero or low-interest loans to the world's poorest countries from the International Development Association (IDA) amounted to $53.3 billion. To meet increased financing needs, the World Bank fully used all the remaining IDA18 resources in fiscal 2020 and frontloaded about half of all the three-year envelope of IDA19 resources in FY21, it said.

In February 2021, IDA donor and borrower country representatives agreed to advance IDA20 by 12 months to enable continued surge financing in the coming years, it added.

Over the same 15 months, the International Finance Corporation (IFC), the World Bank Group's private sector development arm, reached a record high of $42.7 billion in financing, including short-term finance ($10.4 billion) and mobilisation ($14.9 billion), 37 per cent of which was in low-income and fragile and conflict-affected states, the release said.

The Multilateral Investment Guarantee Agency (MIGA), whose mandate is to drive impactful foreign direct investment to developing countries, issued $7.6 billion in new guarantees over the same 15-month period since the onset of the pandemic, of which 19 per cent supported projects in IDA countries and fragile settings, it said.