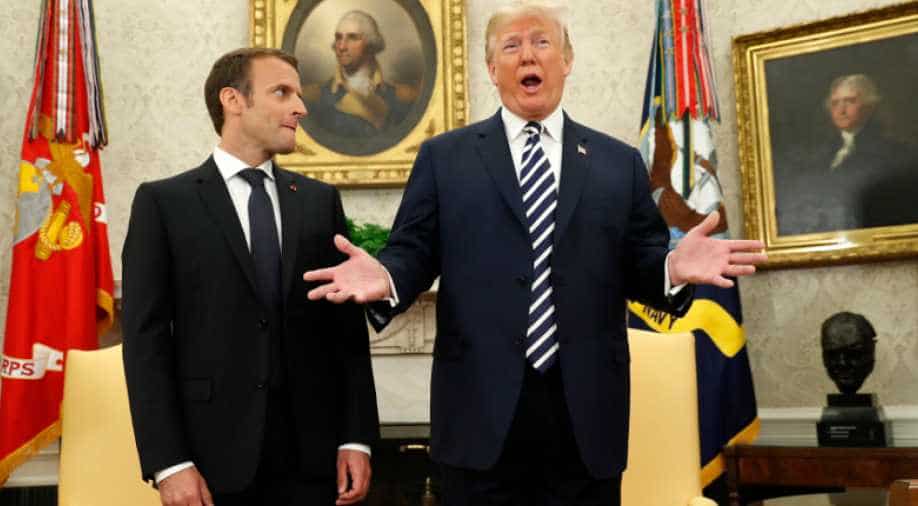 French President Emmanuel Macron looks on as US President Donald Trump speaks during their meeting in the Oval Office. Photograph:( Reuters )

Trump said he and Macron could have an agreement soon on the Iran deal.

French President Macron and President Trump today discussed the Iran nuclear deal at the Oval office in the White House with both leaders keen to hammer out a "new deal".

Trump had earlier termed the Iran nuclear deal brokered by the previous Obama administration as a "terrible deal", "insane" and "ridiculous".

Iran has threatened to hit back at the US if Trump decides to do away with the deal, a decision which must be reached by May 12th.

"I can say that we have had very frank discussions on that, just the two of us," Macron said at the press conference with Trump, adding, "we, therefore, wish from now on to work on a new deal with Iran."

"I think we will have a great shot at doing a much bigger, maybe, deal," Trump said.

"This is a deal with decayed foundations. It's a bad deal, it's a bad structure. It's falling down," Trump added.

"We're going to see what happens on the 12th," the US president added.

Trump said he and Macron could have an agreement soon on the Iran deal.

"We could have at least an agreement among ourselves very quickly. I think we're fairly close to understanding each other," the US president said.

Macron had earlier supported the Iran deal asserting that it allowed the countries monitoring it a realistic chance to keep Tehran's nuclear ambition under control.

He had told Trump the Iran accord is part of a "broader picture" of security in the region which included the volatile situation in Syria.

On Syria, Trump said: "We want to come home. We'll be coming home. But we want to leave a strong and lasting footprint, and that was a very big part of our discussion."

The US president also said that a new NAFTA trade deal could be completed quickly.