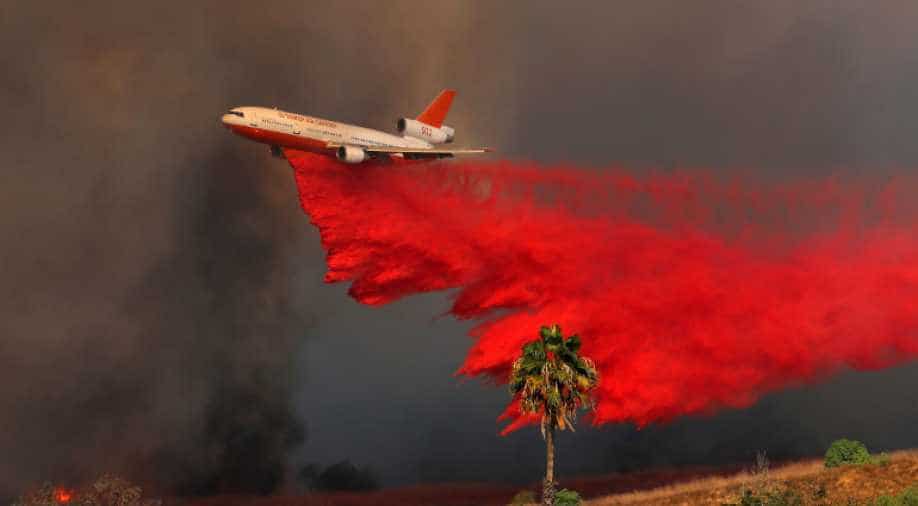 Hundreds of homes and businesses have been destroyed. In photo: A DC-10 drops fire retardant on a wind-driven wildfire in Orange, California. Photograph:( Reuters )

A spate of wildfires fanned by strong winds swept through northern California's wine country on Monday, leaving at least 10 people dead, destroying hundreds of homes and businesses and chasing some 20,000 people from their dwellings.

Governor Jerry Brown declared a state of emergency for Napa, Sonoma and Yuba counties, encompassing some of the state's prime wine-making areas, as the blazes raged unchecked and engulfed the region in thick, billowing smoke that drifted south into the San Francisco Bay area.

Sonoma County bore the brunt of the fatalities, with seven fire-related deaths confirmed there, according to the sheriff's department. Two others died in Napa County and one more in Mendocino County, according to the California Department of Forestry and Fire Protection (CalFire).

Details on the circumstances of those deaths were not immediately available from either CalFire or local officials. But KGO-TV in San Francisco, citing unnamed California Highway Patrol officials, described one of the victims as a blind, elderly woman found dead in the driveway of her home in Santa Rosa, a town in Sonoma County.

Thousands of firefighters battled wind gusts in excess of 50 miles per hour (80 km/h) that have rapidly spread 15 separate wildfires across some 73,000 acres in northern California since erupting late Sunday night, according to CalFire spokesman Daniel Berlant.

About 1,500 homes and commercial buildings have been destroyed throughout the region, Ken Pimlott, director of CalFire, said at a news conference.

The cause of the fires have yet to be determined, officials said.