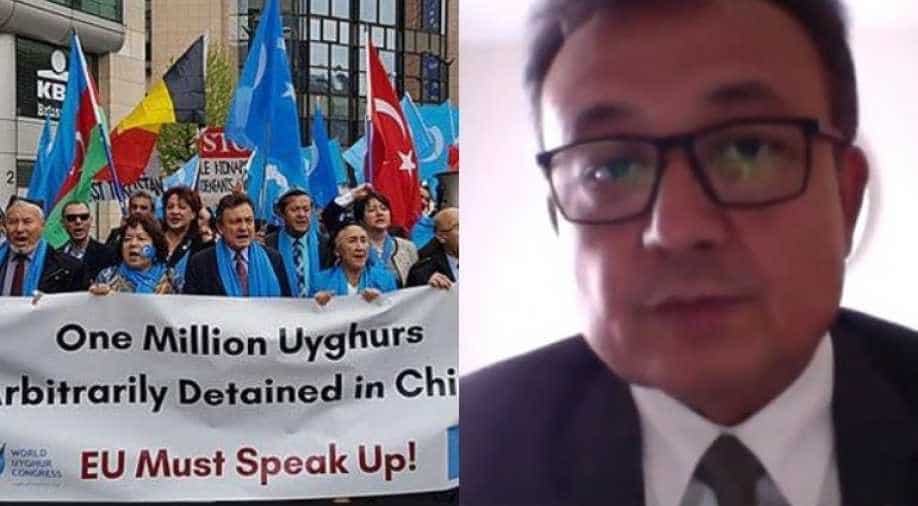 A file photo of a protest against the atrocities against Uighur Muslims in China (left) and Dolkun Isa, President World Uighur Congress(right). Photograph:( Twitter )

Xi Jinping is not just the enemy of the Uighurs, but also of the Mongolian people, Tibetans and all ethnic people in China, Dolkun Isa, President of the World Uighur Congress said.

President of the World Uighur Congress, Dolkun Isa, spoke exclusively to WION's Executive editor Palki Sharma on the persecution of Uighurs in China and on the Xi Jinping regime.

WION: How many Uighurs are currently in the concentration camps of Xinjiang because there is no way we can have an independently verifiable figure...

Dolkun Isa: Well, according to the camp survivor's testimonies, Uighurs faced torture, humiliation, forced medication, sexual assault and deaths in the camps and also indoctrination. They have also been forced to renounce their national and religious identities. Uighurs have to express their loyalty to the Chinese Communist Party and show loyalty to Xi Jinping.

WION: China has always had an uncomfortable relationship with any religion but the case of Uighurs is extreme, why is China persecuting these people? Is Xi Jinping insecure when it comes to minorities?

Dolkun Isa: Yes, Xi Jinping has not only targeted the Uighurs, he has also targeted the Tibetans, Mongolian people and the people from Hong Kong as well. The world has witnessed what has been happening in Hong Kong.

The Chinese government has never kept its promise and Hong Kong's autonomy is over. Xi Jinping is not just the enemy of the Uighurs, but also of the Mongolian people, Tibetans and all ethnic people in China and the enemy of the Hong Kong people as well. It can also be said that the Chinese Communist Party and Xi Jinping are enemies of global democracy, human rights and sovereignty of some countries.

WION: The world has finally woken up to the plight of the Uighurs, a lot of countries are speaking up against China but no country seems to be doing a lot beyond talking, nobody is taking any concrete action against China...

Dolkun Isa: Yes, we can say finally that the world has woken up, but it is not good enough. There are still so many countries which still stand with China and support China.

WION: It is something we have highlighted about China, the case of the Muslim world particularly, they haven't said anything about the genocide of Muslims in China. Pakistan's Imran Khan remains quite, Turkey has been sending back Uighurs to China. Why is all this happening according to you?

Dolkun Isa: Yes, unfortunately, most of the Muslim world continues to remain silent and there are different reasons. One of the important reason is economic interest. Some of the Muslim countries have very close economic ties with China and the second reason is because they have a lot of human rights violations internally, so they are colluding with China and supporting each other.

WION: Xi Jinping has been in power for seven years, he has been called the president for life...what are your views about the Chinese leader?

Dolkun Isa: Xi Jinping is the Communist leader, he is also the biggest dictator today and as I have said he is not only the dictator of the Chinese people, Tibetans and Uighurs, he is also a dangerous man for the whole humanity. He is the biggest dictator, and he is the biggest killer because the Chinese Communist party is the world's biggest terrorist organisation. During the cultural revolution, Mao Zedong killed more than 48 million Chinese people...

WION: What about Xi Jinping's strategy? He has been picking fights with neighbours, also there are a lot of external conflicts including issues within the country, also trade wars and floods...

Dolkun Isa: Xi Jinping is a dictator and all dictators have the same strategy because they never accept democracy and human rights.

WION: Sir, you mentioned about democracy, China's cracked down on pro-democratic movement in 1989 but this is 2020 and the world is watching and most people say a Tiananmen Square-like incident cannot be repeated. Do you think Beijing can repeat something like that today?

Dolkun Isa: Well, if the world does not wake up and stops China and there is no international coalition set up against the dictatorial regime, then a Tiananmen-like massacre will happen again in China. It is the 21st century but Xi Jinping has locked up 3 million Uighurs and killed so many people. The Chinese Communist Party has no limitation and no red line.

WION: But there are still some countries that believe in the Chinese lie...

WION: You have been living in Germany for many years now, do you think in your lifetime you will ever be able to go back home to China?

Dolkun Isa: I left my country in 1994. I was a student leader in the demonstrations of 1988, and I was under house arrest in 1994 but I soon left my country since then I have never returned to my country.

WION: Do you think your return will happen under the leadership of Xi Jinping?

Dolkun Isa: During Xi Jinping's time this kind of freedom will not be coming but I strongly believe that such a regime will not be forever. Humanity has witnessed so many dictators - Stalin, Hitler- but all of them have gone. Now only Xi Jinping and the Chinese Communist Party exists. I know millions of Chinese people are suffering today, and that's why I believe this regime won't be around for long.