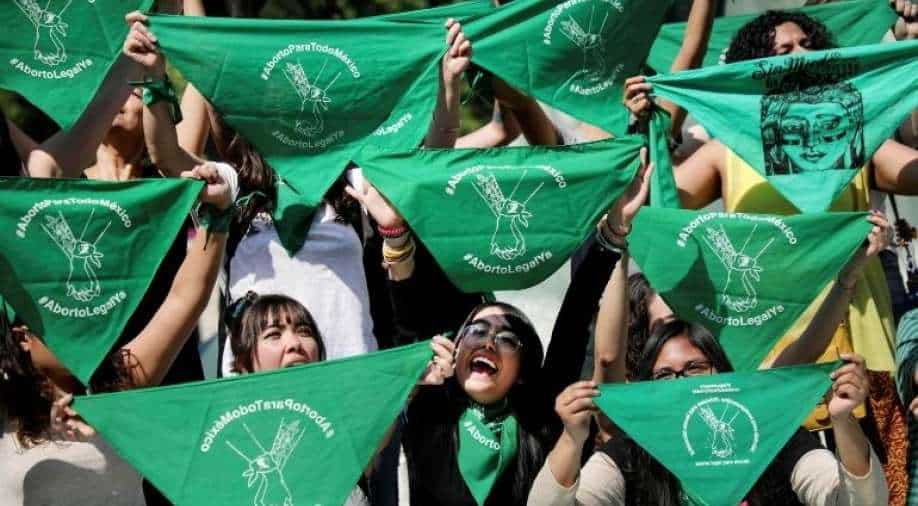 Women hold green handkerchiefs during a protest in support of legal and safe abortion in Mexico City, Mexico Photograph:( Reuters )

The 10-0 unanimous decision by the court is a major victory for advocates of women's health and human rights in Mexico, which is the world's second-biggest Roman Catholic country

The Supreme Court of Mexico has decriminalised abortion and ruled that criminal penalties on it are unconstitutional.

The 10-0 unanimous decision by the court is a major victory for advocates of women's health and human rights in Mexico, which is the world's second-biggest Roman Catholic country. Now, courts in the country can no longer prosecute abortion cases.

The ruling sharply contrasts with the recent actions in the United States that enacted tougher laws against the practice.

Hailing the decision as "a watershed moment" for all women, especially the most vulnerable, President of the Mexican Supreme Court Arturo Zaldivar said, "It is one more step in the historical struggle for (women's) equality, dignity and the full exercise of their rights."

Prior to the ruling, abortion was legal in the first 12 weeks of pregnancy n Mexico City and three other states, while elsewhere, the procedure was only permitted in cases of rape.

Although Mexican states have the freedom to dictate their laws, they are invalidated if they contravene Supreme Court rulings that establish jurisprudence.

The landmark ruling in Mexico follows the historic legalisation of the right in Argentina, which took effect earlier this year.