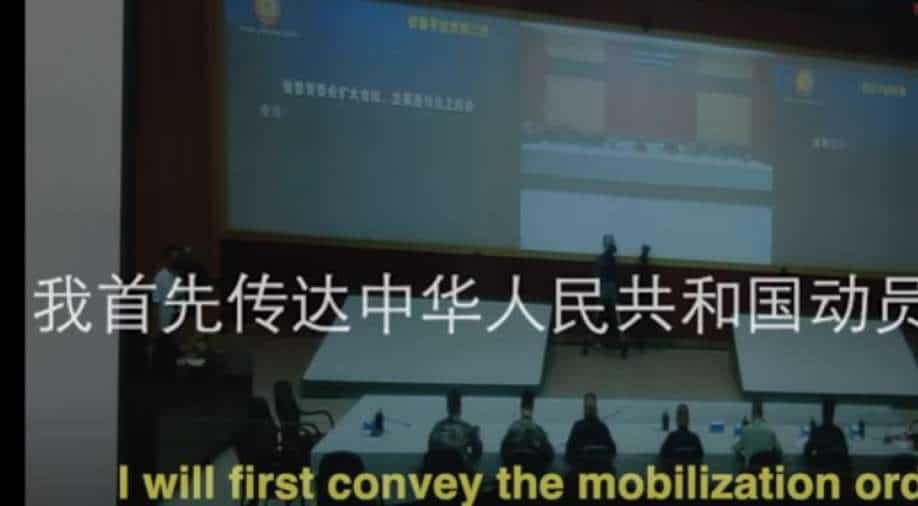 In the explosive video titled: "War mobilisation meeting of PLA and Guangdong province", the commanders are headed discussing deploying 140,000 personnel, 953 ships of various types and1,653 units of various unmanned equipment including drones in order to invade Taiwan.

The commanders in the video/audio clip are heard saying to "resolutely implement the orders of the party central committee, President Xi and resolutely accomplish Guangdong mission to ensure resources to achieve a strategic and decisive victory".

According to #CCP & PLA's rules, anyone who dares to leak info of this meeting is subjected to death.
The meeting on May 14 was a top-secret one about #PLA and #Guangdong Province's War Mobilization plan. Audio of meeting: https://t.co/yc9KLVzsxq

"We won't hesitate to start a war, crush Taiwan's independence and strong enemies' plots, and resolutely defend our national sovereignty and territorial integrity," it says.

"This is the Party Central Committee, General Secretary Xi Jinping's major strategic decision to coordinate the big picture of international and domestic affairs".

Watch: China blows up replica of Taiwan's naval base

The YouTube video published by Zeng has gone viral with experts looking into China's stated goals to annex Taiwan. However, it is still unverified and is being examined by various security agencies.

The explosive video is titled: "War mobilisation meeting of PLA and Guangdong province" and categorised as "top secret recording". It details "mobilisation" in six major cities in the Pearl River Delta and the main deployment of the 74th Army Group as a "key support".

"In terms of mobilization focus, we need to coordinate the two areas of the Taiwan Strait and the South China Sea," the commander is heard saying.

The commanders intend to use 38 aircraft, 588 train cars and 19 civil facilities including airports and docks as part of the mobilisation plan in order "to offer full support for the decisive battle at the Taiwan Strait."

Jennifer Zeng claimed the meeting took place on May 14 and was "top secret" while informing that "according to CCP & PLA's rules, anyone who dares to leak info of this meeting is subjected to death."