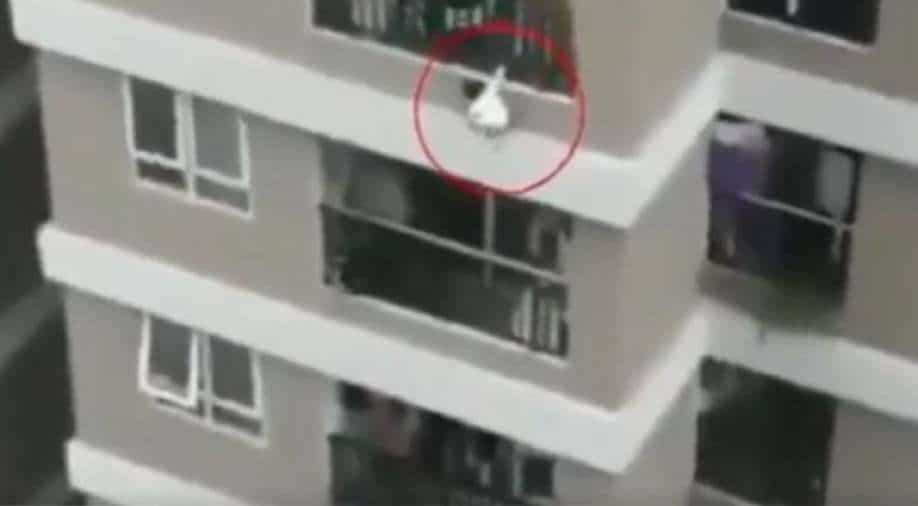 The 31-year-old first thought that the girl was showing tantrums, but soon realised that she was about 50 metres above the ground

A heroic act by a delivery driver in Vietnam's Hanoi has saved a two-year-old child who fell from a 12th-floor balcony.

Nguyen Ngoc Manh was waiting inside his car at 5 pm on Sunday when a child's crying made him stick his head out of the window, Anninhthudo news organisation reported.

A delivery man, 31, has become a real-life #superhero after saving a two-year-old girl as she falls from the 12th floor of a 16-story building in Hanoi, #Vietnam.
The lucky baby was taken to a nearby hospital while the superhero delivery man suffered a slight sprain. pic.twitter.com/0IZW1ZEFiL

The 31-year-old first thought the girl was showing tantrums, but soon realised that she was about 50 metres above the ground.

"I saw a girl climbing out of the balcony," the delivery man said, still trembling due to the incident, according to the Vietnam Times.

Watch | Men in parachutes jump off 25-floor hotel in Nashville

He lost control as he stood on a metallic roof used to store generators to catch the girl, he told VN Express International.

But, he flung forward to catch the child, causing a dent to the roof in the process.

"I tried to reach out my hand and took the maximum effort to catch the girl," the man said as he hoped that he can at least prevent the girl from falling directly on the ground.

A video of the incident showed how the child moved herself out of the balcony railing and began to fall as neighbours shouted for her rescue.

"Luckily, the baby fell into my lap," Nguyen said.

"I hurriedly embraced her then saw blood leaking from her mouth, I was very frightened."

The child was sent to the National Children's Hospital where doctors told local media her hip had been dislocated but there were no other injuries.