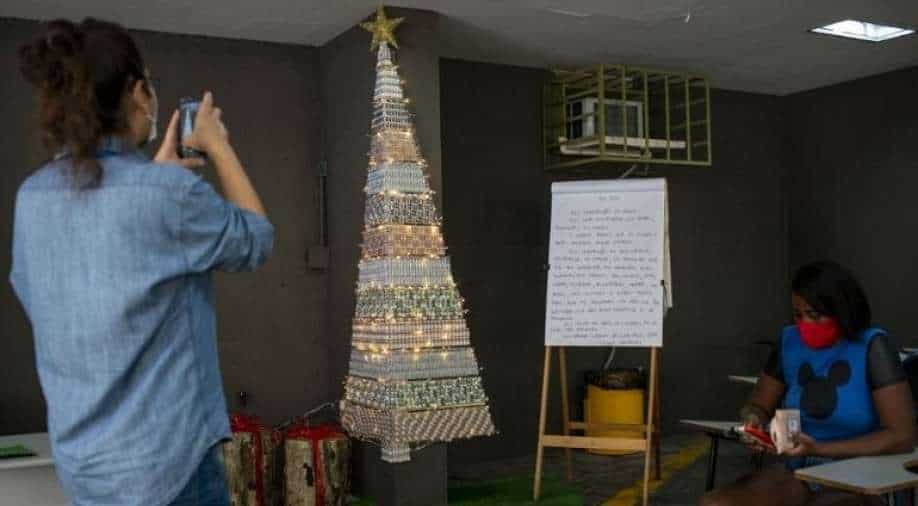 A woman takes photos of a christmas tree made with COVID-19 and Flu vaccine vials at the Public Health Basic Unit "Ernani Agricola", in the Lapa neighborhood in Rio de Janeiro, Brazil Photograph:( Twitter )

The tree, assembled by healthcare workers at the Ernani Agricola Municipal Health Center in Rio de Janeiro, has turned into a symbol of hope

A video of a Christmas tree made with empty Covid-19 vials has gone viral on the internet.

The tree, assembled by healthcare workers at the Ernani Agricola Municipal Health Center in Rio de Janeiro, has turned into a symbol of hope.

The purpose behind this creative tree is to highlight and increase awareness of vaccinations in the country.

Similarly, a picture of an illegal garbage dump captured by a photojournalist made rounds on social media.

The Christmas tree pulled together from a fetid mountain of trash, was assembled by a 12-year-old called Gabriel Silva.

The South American country has registered 222,177,059 cases since the pandemic began, while the official death toll has risen to 616,457, according to ministry data, in the world's second-deadliest outbreak outside the United States.

But with 65 percent of the country's 213 million people now fully vaccinated, the number of infections and deaths has plunged.

Under measures decided on Tuesday after President Jair Bolsonaro opposed the use of a vaccine passport, unvaccinated travelers arriving in Brazil will have to quarantine for five days and be tested for COVID-19.