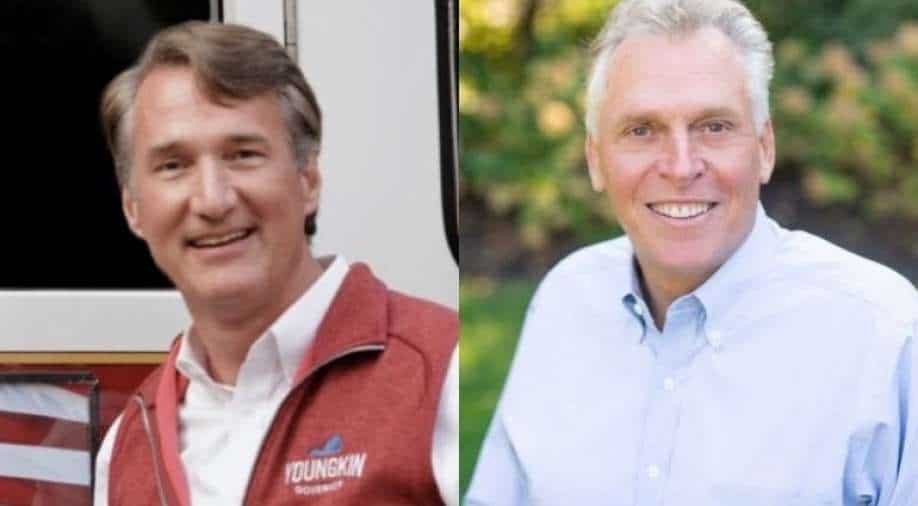 The US state of Virginia prepared to vote Tuesday for its next governor in a margin-of-error skirmish seen as the first major test of President Joe Biden's political brand.

A harbinger of the parties' prospects in next year's midterm elections, the race between Democratic former governor Terry McAuliffe and Republican tycoon Glenn Youngkin has narrowed in recent weeks and is squarely in toss-up territory.

"At this point, the outcome of this race will all depend on voter turnout," McAuliffe said in an 11th hour mailout to voters late Monday.

"Republicans are fired up to elect their guy, and now, with Donald Trump rallying up his base of right-wing extremists on the eve of election day, Glenn Youngkin is sure to have a strong showing tomorrow."

A McAuliffe win would reignite Washington Democrats' faltering push for twin infrastructure and social welfare mega-bills that are the cornerstone of Biden's $3 trillion vision for remaking the economy.

With both packages bogged down by infighting in Congress, moderates would likely see defeat in Virginia as a warning from the electorate to ease up on the president's historic spending plans.

On the Republican side, defeat for Youngkin could finally touch off a reckoning of a different sort on the party's previously unshakeable fealty to twice-impeached Trump, who lost Virginia by 10 points.

As he tries to mount a return to an office he held four years ago, McAuliffe must negotiate significant headwinds, with the majority party in Washington usually incurring losses during a president's first term.

Youngkin has been performing his own high-wire act, as the vast majority of Republicans believe Trump's false claims that the presidency was stolen in a fraudulent election, making acknowledging the truth politically risky.

Also Read | As Trump thunders about last election, Republicans worry about the next one

While he was seeking the nomination, Youngkin conjured the spirit of the former president, refusing to say whether he would have voted to certify Biden's election victory after the failed insurrection by Trump supporters on January 6.

But the wealthy former investment banker, 54, has managed to distance himself from Trump at the business end of the campaign, focusing on local "culture war" issues like abortion, mask mandates and the teaching of America's racial history.

"This is a moment for Virginians to push back on this left, liberal, progressive agenda and take our commonwealth back," Youngkin told a rally in state capital Richmond on Monday.

Trump has not shown up to campaign in person, although he has angrily denied a rift with Youngkin and released an incendiary statement on Monday smearing McAuliffe as a "low-life politician who lies, cheats, and steals."

Also Read | US unveils crackdown on methane, starting with oil and gas rules

In contrast, a number of other big-name Democrats have wooed Virginians in recent days, including former president Barack Obama, First Lady Jill Biden and the party's rising star Stacey Abrams.

McAuliffe took an early lead in the race but his seven-point cushion has been tightening since summer, and the latest polling average by political analysis website FiveThirtyEight shows Youngkin ahead by one point.

If the polls are an accurate reflection of voter intention, experts believe it could take days to determine the winner.

Leaning into his image as the establishment candidate, McAuliffe has sold himself as a former incumbent who brought back jobs after the worldwide financial crisis of 2008, and has pledged to repeat the trick for the pandemic.

The 64-year-old has sought to nationalize the race -- voicing irritation over deadlock in Washington and making the vote a referendum on Trump and Trumpism.

Biden joined McAuliffe in Arlington last week, blasting Youngkin as "an acolyte of Donald Trump" and warning that extremism "can come in a smile and a fleece vest."

Mark Bayer, a congressional aide for two decades and a former chief of staff to Senator Ed Markey, warned that convincing Virginians that Youngkin is nothing more than a Trump mini-me could prove a tall order.

"Despite being endorsed by Trump and making strongly positive statements about him, Youngkin -- at least stylistically, if not politically -- doesn't appear to be a Trump clone," Bayer told AFP.

"Youngkin's 'soccer dad' persona is appealing to swing voters, even as his conservative politics are firmly Republican."