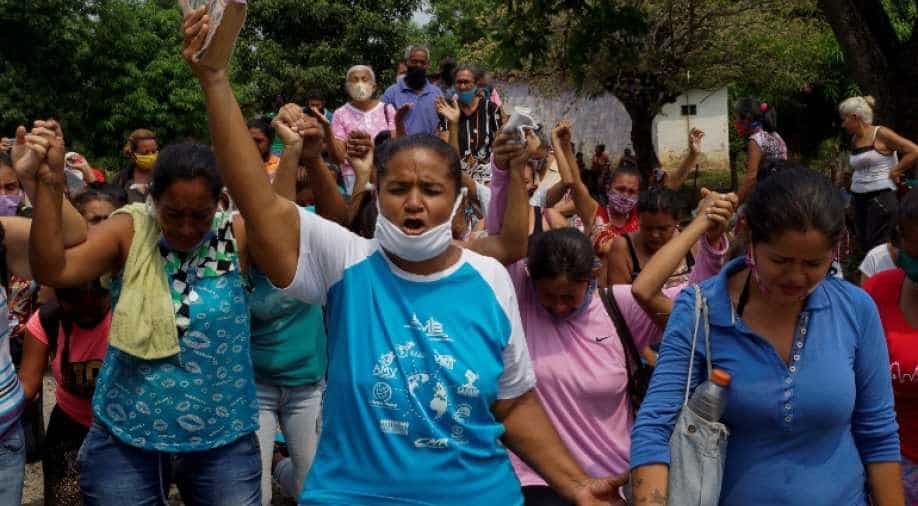 Relatives of inmates pray outside Los Llanos penitentiary after a riot erupted inside the prison leaving dozens of dead as the coronavirus disease (COVID-19) continues in Guanare, Venezuela Photograph:( Reuters )

At least 47 people died and 75 wounded after a prison riot broke out in western Venezuela, a country where NGOs and inmates' families regularly complain of unhygienic conditions, violence and overcrowding in the prisons.

Both OVP and Martinez confirmed that all the dead were detainees.

The riot happened on Friday afternoon at the Los Llanos prison center in Guanare city.

An army report on Friday said the incident started when inmates began destroying "the security fences around the perimeter" in a "massive escape attempt." It added the prison's director was wounded in the act.

However, Martinez, who represents the state where the prison is located, refuted this claim, stating the act was staged by a group of inmates "because they did not have access to food."

According to OVP, prison officials opened fire following the incident in the prison which has a capacity for 750 prisoners but some 2,500 are presently behind bars.

The UN's Office of the High Commissioner for Human Rights (UNOHCR) on Twitter said it was "gravely concerned" about the incident and requested the officials to carry out a "thorough investigation".

"We urge the authorities to conduct a thorough investigation, tackle overcrowding, and guarantee basic rights," the UNOHCR said.

Venezuela's prisons are infamous for severe violence and poor conditions of the prisoners.

As many as 97 deaths occurred in Venezuelan prisons in 2019, 70 per cent of which were due to diseases such as tuberculosis and inadequate supply of medicines, according to OVP.