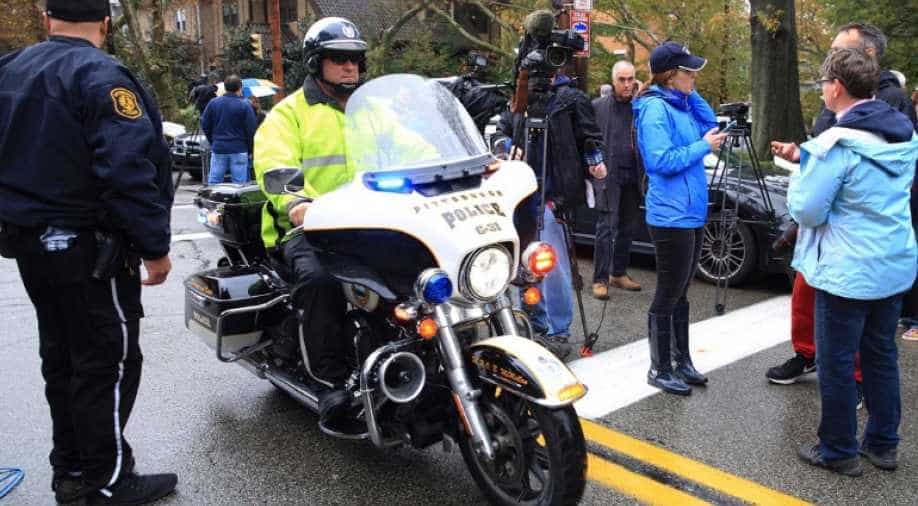 'This evil Anti-Semitic attack is an assault on all of us,' Trump told supporters at an election rally in Illinois, drawing loud cheers as he vowed to fully enforce the death penalty for such crimes.  Photograph:( Reuters )

Bowers entered a room where a baby-naming ceremony was taking place. He rained bullets, killing 11 people, all of them adults.

Gunman Robert Bowers only needed 20 minutes to sow terror at the Tree of Life synagogue in the US city of Pittsburgh, where congregants had gathered peacefully for Shabbat services marking a day of rest.

Shortly before 10 am (1400 GMT) the 46-year-old Bowers -- who had penned virulent anti-Semitic messages on social networks -- burst into the synagogue armed with an assault rifle and three handguns.

Stephen Weiss, a member of the congregation who was inside the building, told the Tribune-Review newspaper he heard dozens of shots coming from the front lobby.

"We had services going on in the chapel when we heard a loud noise in the lobby area," he said. "I recognized it as gunshots."

Like any other Saturday, people from three different congregations were scattered throughout rooms in the building, located in the Squirrel Hill neighborhood that is historically the heart of Jewish life in greater Pittsburgh.

Bowers entered a room where a baby-naming ceremony was taking place. He rained bullets, killing 11 people, all of them adults.

As he attempted to leave the synagogue, he found himself face-to-face with a uniformed officer calling for reinforcement.

He barricaded himself on the building's third floor and was taken into custody after a shootout with police.

Twenty minutes after his first shot, Bowers surrendered to officers. He was hospitalized with multiple injuries but authorities said he was in "fine" condition.

Ben Opie, 55, lives in front of the synagogue and told journalists his wife was heading out for a volunteer shift when police demanded she stay inside.

"It's just," he said before pausing. "Sorry, it's shaking me more than usual."