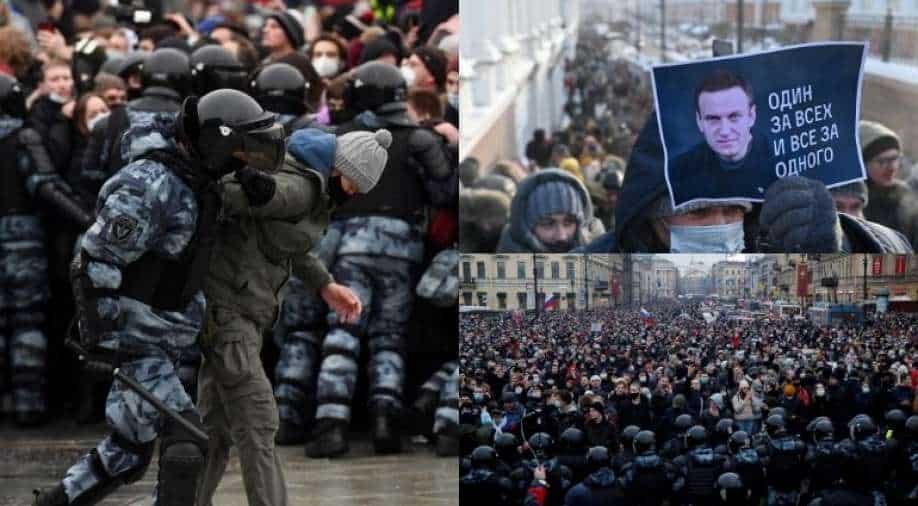 Police clashed violently with protesters in Moscow and arrested more than 2,500 in cities across the country Saturday as Russians took to the streets to denounce Kremlin rule and demand the release of Navalny

Both US and the European Union have expressed ''deep concerns'' over Russia's response to mass protests in support of Kremlin critic Alexei Navalny on Saturday.

Police clashed violently with protesters in Moscow and arrested more than 2,500 in cities across the country Saturday as Russians took to the streets to denounce Kremlin rule and demand the release of Navalny.

"The United States strongly condemns the use of harsh tactics against protesters and journalists this weekend in cities throughout Russia," State Department spokesman Ned Price said in a statement.

Navalny being taken into custody and the arrests of his supporters were "troubling indications of further restrictions on civil society and fundamental freedoms," he added.

"We call on Russian authorities to release all those detained for exercising their universal rights and for the immediate and unconditional release of Aleksey Navalny," Price said, using an alternative spelling.

"We urge Russia to fully cooperate with the international community's investigation into the poisoning of Aleksey Navalny and credibly explain the use of a chemical weapon on its soil."

"Following unfolding events in #Russia with concern," Josep Borrell wrote on Twitter as tens of thousands protested in Russia in support of opposition leader Alexei Navalny.

"I deplore widespread detentions, disproportionate use of force, cutting down internet and phone connections. We will discuss on Monday next steps with EU Foreign Ministers."

In Russia tens of thousands nationwide answered Navalny's call to rally, which he issued after he was detained at a Moscow airport on arrival from Germany, where he had been recovering from a near-fatal poisoning with a nerve agent.

Saturday's protests took on an unprecedented geographic scale, spanning more than 100 cities across the country. Previous large-scale opposition demonstrations in 2012 and 2019 were largely centered in Moscow.