US accuses Russia of breaching treaties with 'invincible' weapons 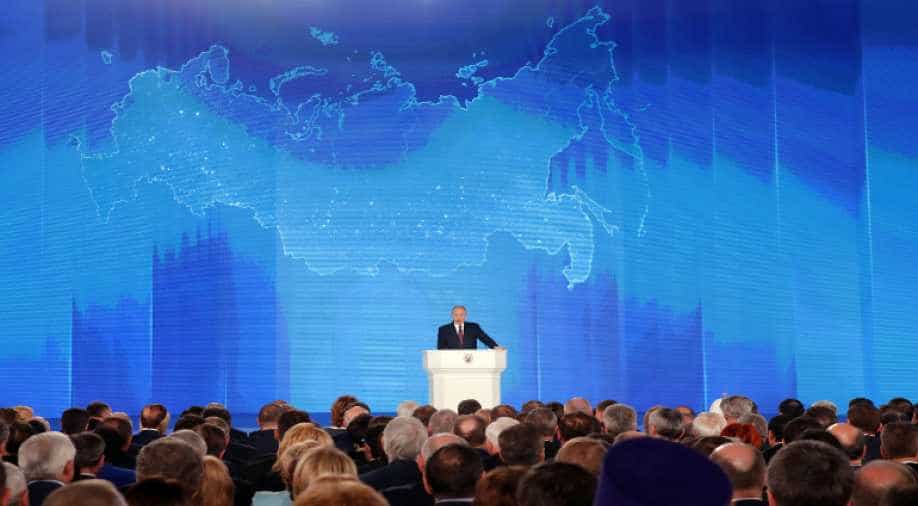 Putin unveiled the new arsenal earlier Thursday in a state of the nation address, challenging Washington to a new arms race ahead of a presidential election that will all but certainly confirm his grip on power.

Putin left his usual Kremlin perch to this year speak from a nearby exhibition centre -- allowing him to show a series of video montages of missiles crossing mountains and oceans, heading over the Atlantic before striking the US eastern seaboard.

He quoted a speech he gave in 2004, vowing that Russia would develop a new generation of weaponry, a promise that he said he has now fulfilled.

"No one really wanted to talk to us basically. No one listened to us then. Listen to us now," Putin said, prompting a standing ovation from the audience of top officials, lawmakers and celebrities.

He presented Russia's military efforts as a response to recent actions by the United States, which last month unveiled plans to revamp its own nuclear arsenal and develop new low-yield atomic weapons.

The State Department expressed outrage at Putin's presentation and his "cheesy" animated video of warheads over US soil -- and said the Russian leader had confirmed long-held allegations about his program.

"It was certainly unfortunate to have watched the video animation that depicted a nuclear attack on the United States," spokeswoman Heather Nauert told reporters.

"That's something that we certainly didn't enjoy watching. We don't regard that as the behaviour of a responsible international player," she added.

"President Putin has confirmed what the United States government has known for a long time but that Russia has denied prior to this," she added.

"Russia has been developing destabilizing weapons systems for more than a decade in direct violation of its treaty obligations."

Specifically, Nauert said that Moscow had proven itself in violation of the 1987 Intermediate-Range Nuclear Forces Treaty (INF), through its development of ground-launched cruise missiles.

The Pentagon reacted with more equanimity, with a spokesman insisting that the US military remains "fully prepared" to react to "anything that comes our way."

The United States has long accused Russia of breaching the INF treaty and, while it is modernizing its own nuclear arsenal, says that it remains in compliance with the terms of the Cold War accord.

The spat came as relations between the powers lie frozen at levels not seen since the Cold War over the conflicts in Ukraine and Syria and accusations that Moscow interfered in the US presidential election in 2016.

Also Thursday, the US formally approved the sale of Javelin anti-tank missiles to Ukraine, which is fighting a Russian-backed insurgency in the east of the country.

In a speech that ran almost two hours, Putin showed tests of a new missile system that he said could fly at 20 times the speed of sound and manoeuvre up and down and is not owned by any other country.

"This makes it absolutely invincible for any forms of air and missile defence," he boasted, calling it an "ideal weapon."

Russia has also developed unmanned underwater devices that move much faster than submarines and torpedoes and can carry nuclear warheads, Putin said, adding: "It's just fantastic!"

Defense Minister Sergei Shoigu later said Russian arms would be able to "overcome all existing anti-missile systems" such as those the US intends to deploy in eastern Europe and South Korea.

"This anti-missile 'umbrella' turns out to be a bit 'leaky'," he said in comments released by his ministry.

Putin, who has led Russia for almost two decades and is seeking in the March 18 election a historic fourth Kremlin term that would extend his rule to 2024, also laid out a number of domestic measures in the speech.

Putin has refused to take part in TV debates with other candidates, but the address suggested cutting poverty and improving the environment would be among the top goals of his expected new six-year term.

- 'Unacceptable' poverty -
The 65-year-old vowed to cut the country's "unacceptable" poverty rate in half over six years but said 22 million fewer Russians were now living below the poverty line than when he was first elected president.

Putin, who coughed throughout the speech and was forced to pause to drink, was given an ecstatic reception in the hall during the televised address but some online comments were less complimentary.

"The old man only perked up when he was talking about how he can destroy the world. A moment of truth!" former Kremlin advisor Gleb Pavlovsky said on social media.

Despite Putin's campaign promises when he returned to the Kremlin in 2012 after four years as prime minister, his last term was marked by a fall in living standards and Russia's international isolation.

Boosted by a slavish media and foreign military adventures such as the annexation of Crimea in 2014, his approval rating remains sky-high and official polls suggest he will take almost 70 percent of the vote on March 18.