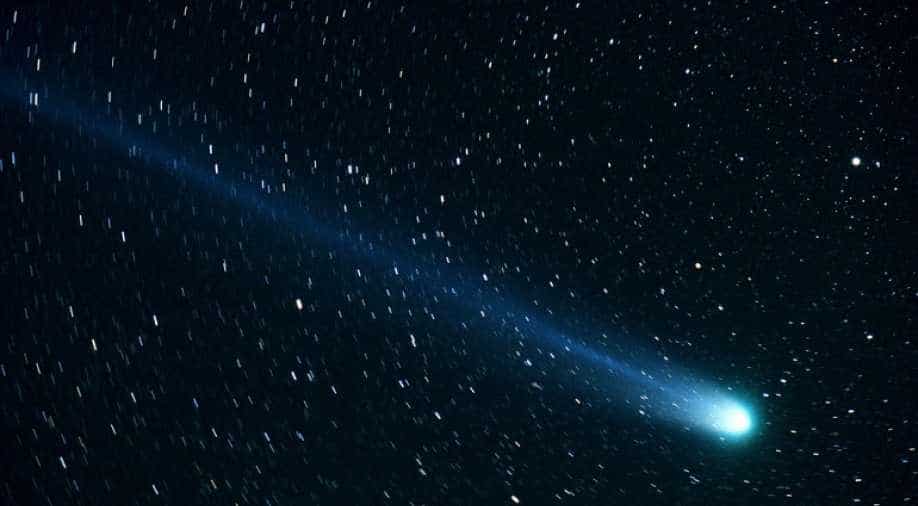 When the 'Oumuamua was spotted, it had already passed its closest point to the Sun and was heading back into interstellar space, researchers said. Photograph:( Others )

A dark, reddish and cigar-shaped object that zipped through our solar system from outer space last month is nothing like any cosmic body seen before, say scientists who have classified it as the first interstellar asteroid.

Last month the Pan-STARRS 1 telescope in Hawai'i picked up a faint point of light moving across the sky.

It initially looked like a typical fast-moving small asteroid, but additional observations over the next couple of days allowed its orbit to be computed fairly accurately.

The orbit calculations revealed beyond any doubt that this body did not originate from inside the solar system, like all other asteroids or comets ever observed, but instead had come from interstellar space.

Although originally classified as a comet, observations from revealed no signs of cometary activity after it passed closest to the Sun in September. The object was reclassified as an interstellar asteroid and named 'Oumuamua.

The name, which was chosen by the Pan-STARRS team, is of Hawaiian origin and reflects the way this object is like a messenger sent from the distant past to reach out to us, researchers said.

The asteroid is up to 400 metres long and highly- elongated - perhaps 10 times as long as it is wide.

That aspect ratio is greater than that of any asteroid or comet observed in our solar system to date, scientists said.

While its elongated shape is quite surprising, and unlike asteroids seen in our solar system, it may provide new clues into how other solar systems formed.

When the 'Oumuamua was spotted, it had already passed its closest point to the Sun and was heading back into interstellar space, researchers said.

Combining the images from various telescopes, astronomers led by Karen Meech from Institute for Astronomy in the US found that 'Oumuamua varies dramatically in brightness by a factor of ten as it spins on its axis every 7.3 hours.

"This unusually large variation in brightness means that the object is highly elongated: about ten times as long as it is wide, with a complex, convoluted shape," said Meech.

"We also found that it has a dark red colour, similar to objects in the outer Solar System, and confirmed that it is completely inert, without the faintest hint of dust around it," she said.

These properties suggest that 'Oumuamua is dense, possibly rocky or with high metal content, lacks significant amounts of water or ice, and that its surface is now dark and reddened due to the effects of irradiation from cosmic rays over millions of years. It is estimated to be at least 400 metres long.

Preliminary orbital calculations suggested that the object had come from the approximate direction of the bright star Vega, in the northern constellation of Lyra.

However, even travelling at a breakneck speed of about 95,000 kilometres per hour, it took so long for the interstellar object to make the journey to our Solar System that Vega was not near that position when the asteroid was there about 300,000 years ago.

'Oumuamua may well have been wandering through the Milky Way, unattached to any star system, for hundreds of millions of years before its chance encounter with the Solar System.

Astronomers estimate that an interstellar asteroid similar to 'Oumuamua passes through the inner Solar System about once per year, but they are faint and hard to spot so have been missed until now.

It is only recently that survey telescopes, such as Pan- STARRS, are powerful enough to have a chance to discover them.