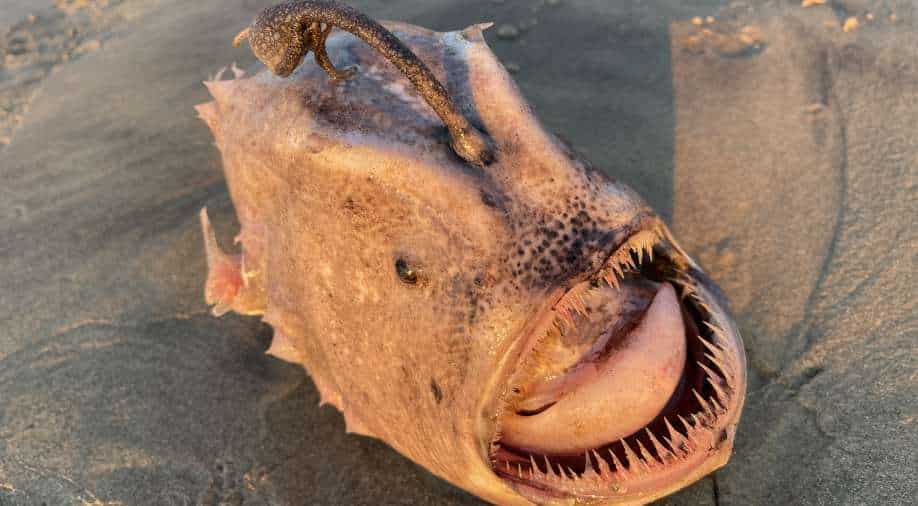 Scientifically known as Himantolophidae, footballfish live in waters that are 3,000-4,000 feet deep. The creature is mostly found in tropical and subtropical waters of the Atlantic, Indian, and Pacific Oceans

Pictures of an ultra-rare deep-sea fish dubbed “deep-sea monster” has gone viral after a tourist spotted the creature washed ashore at a beach in California, US

On November 13, Jay Beiler was walking on Black’s Beach in Torrey Pines in San Diego when he spotted the “ultra-rare” species.

He initially thought that it was a jellyfish, but upon a closer look, he realised that it was something that he had never seen before.

The odd-looking creature piqued Beiler’s interest as he clicked three pictures of the creature and shared them with others.

The photos eventually ended up with scientists at the Scripps Institution of Oceanography, who revealed that the creature was a Pacific footballfish.

In an interview to a local media, Beiler said that the creature was large, and its length was about a foot.

“I have never seen anything quite like this before,” Beiler told NBC 7 San Diego.

“At first, I thought it was a like a jellyfish or something, and then I went and looked at it a little more carefully, and some other people were gathered around it too, and then I saw that it was this very unusual fish. It’s the stuff of nightmares mouth almost looked bloody,”

Scientifically known as Himantolophidae, footballfish lives in waters that are 3,000-4,000 feet deep. The creature is mostly found in tropical and subtropical waters of the Atlantic, Indian, and Pacific Oceans.

A professor of zoology, Johan Reinhardt, had first discovered the fish in 1837.