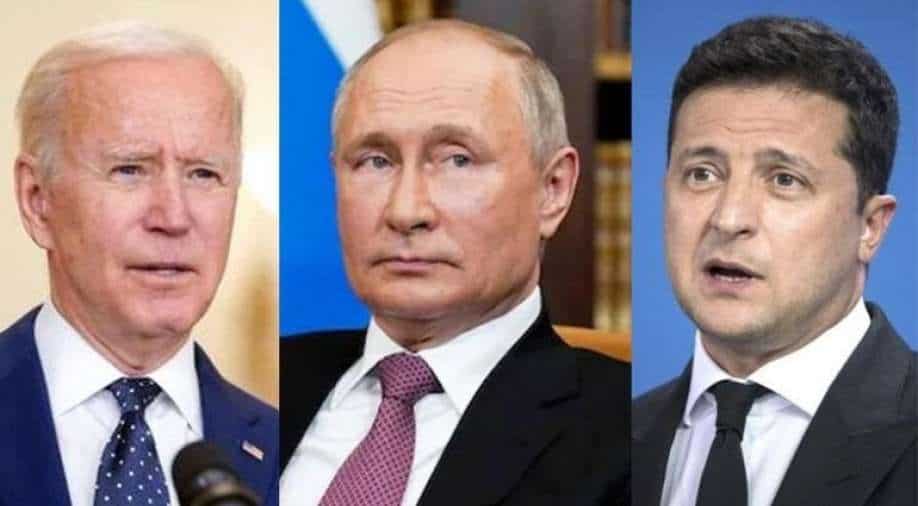 In this combination of file photos, US President Joe Biden can be seen along with Russian President Vladimir Putin and Ukrainian President Volodymyr Zelensky Photograph:( Agencies )

The United States Treasury Department said on Monday that the country has banned all US transactions with Russia's central bank effective immediately.

"This action effectively immobilises any assets of the Central Bank of the Russian Federation held in the United States or by US persons, wherever located," the Treasury said of the measure taken in coordination with Western allies.

The Biden administration estimates that the move could impact “hundreds of billions of dollars” of Russian funding. Its officials said Germany, France, the UK, Italy, Japan, European Union and others will join the US in targeting the Russian central bank.

Experts believe that the move will severely limit Russia's ability to defend the ruble and prop up its economy.

The Russian currency plunged about 30 per cent against the US dollar Monday after Western nations announced moves to block some Russian banks from the SWIFT international payment system and to restrict Russia’s use of its massive foreign currency reserves.

Also read | Central Bank of Russia hikes key rate to 20% from 9.5% amid sanctions

While the SWIFT move will hinder Russian banks from communicating with international peers, analysts say limiting the use of more than $630 billion in international reserves could prove even costlier for Russia.

In addition to sanctions, the US and Germany announced they will send Stinger missiles to Ukraine among other military supplies.

The European Union, founded to ensure peace on the continent after World War II, is supplying lethal aid for the first time, including anti-tank weapons and ammunition.

In response, Kremlin spokesman Dmitry Peskov said, "The shipments of weapons and munitions to the Ukrainian territory in our opinion could and will be a very dangerous and destabilising factor which will not in either case contribute to peace and the restoring of order in Ukraine."

Peskov called the imposition of sanctions against Russian President Vladimir Putin "absurd", and said that the Russian president was "quite indifferent about it."

"Everyone knows that the President doesn't have any assets apart from the ones he declares every year - a trailer, a flat, some bank deposits maybe," he said.