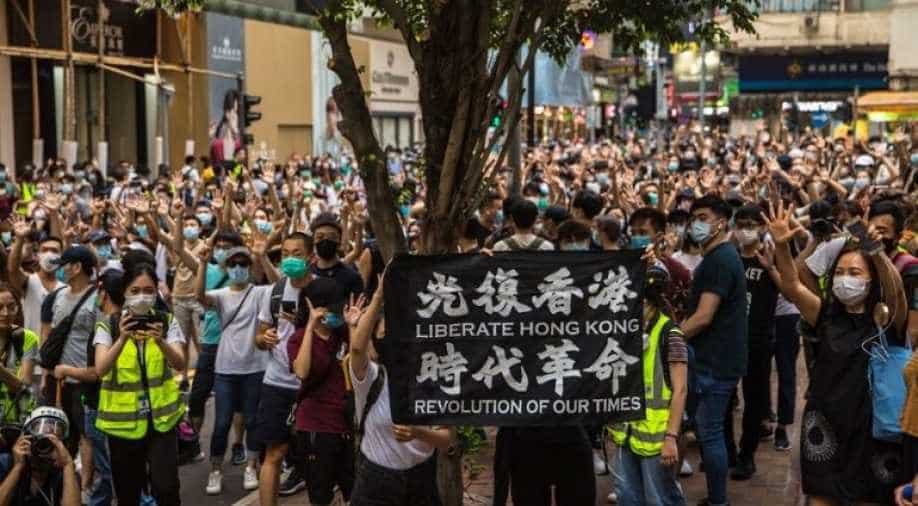 Protesters chant slogans during a rally against a new national security law in Hong Kong on July 1, 2020, on the 23rd anniversary of the city's handover from Britain to China Photograph:( AFP )

Even before the law was formalised, the UK had promised assistance to Hong Kongers if China went ahead with the legislation

United Kingdom Prime Minister Boris Johnson on Wednesday announced officially that his country would offer immigration rights to the people of Hong Kong in the aftermath of China passing the controversial national security law in Hong Kong.

Even though China claims it will let Hong Kong take care of its affairs, in rare circumstances people could be extradited to mainland China. In essence, this law materialises the goals of the now-panned extradition law while effectively ensuring no dissent against Chinese administration brews in the financial hub.

Even before the law was formalised, the UK had promised assistance to Hong Kongers if China went ahead with the legislation. As per this promise, those in possession of the British National Overseas passport could live in the UK, and work there. This would pave way for citizenship.

"That is precisely what we will do now," Johnson told the parliament.

Earlier, authorities had claimed that the law would be used to weed out “terrorists” from the city, while alluding to the year-long protests in the city which ended in a lot of violence, and only simmered down with the advent of COVID-19.

On July 1, Hong Kong marks 23 years since it was returned to China by Britain, as part of the “one country, two systems” deal, which gives special privileges to the people of Hong Kong which are not available elsewhere in the Chinese mainland.

Additionally, the city is judged by its mini-constitution called “Basic law”.

With the goal to stifle anti-government protests, the legislation criminalises subversion, secession, terrorism, and working with foreign forces. The sedition aspect of the law essentially make any critique of the Chinese government illegal.

Any actions by people qualifying as “endangering the state” may be used to arrest people.