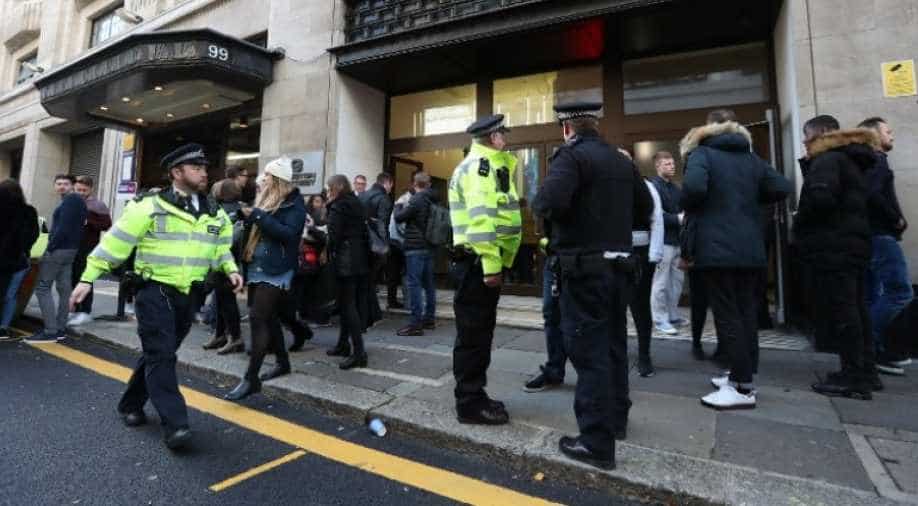 Police officers are seen as evacuated staff return to work at the office building housing Sony Music's offices in London. Photograph:(AFP)
Follow Us

Armed police stormed into Sony Music's offices in London on Friday after two people were stabbed in what the company said was a violent argument between two kitchen staff.

Panicked employees were evacuated from the large office building, which also houses Warner Music Group, and police said both victims were arrested.

"Two members of the catering team were involved in a violent altercation," Sony Music said in a statement.

London's Metropolitan Police said it was called at around 11:00 am (1100 GMT), dispatching firearms officers and emergency medical workers and evacuating staff as a precaution.

"Two men were found suffering from stab injuries. They were both arrested at the scene on suspicion of causing grievous bodily harm," it said in a statement.

"The men have been taken to hospital where they remain. Their injuries have been deemed non-life threatening."

Maria Afolabi, 25, a finance analyst with Warner, said the first she knew of a problem was when the fire alarm sounded.

As she made her way out of the building, she said she saw a Sony staff member in tears and armed police storming up the stairs.

"We didn't know what it was. They had massive guns and were running up," she said.

An unnamed Sony employee told the Press Association news agency that the kitchen staff, employed by a catering company, were "running around chasing each other" and "slashing each other up".

The street was briefly cordoned off during the incident.

The area is in the High Street Kensington shopping district and Sony Music is opposite the offices of the Daily Mail newspaper.

Trish Ellis, a personal assistant at The Mail on Sunday newspaper who witnessed the incident, told PA: "Armed police were going in six-plus at a time, and more and more of them but they seemed to be keeping people in the building.

"Gradually they started to release people in tens, twenties."