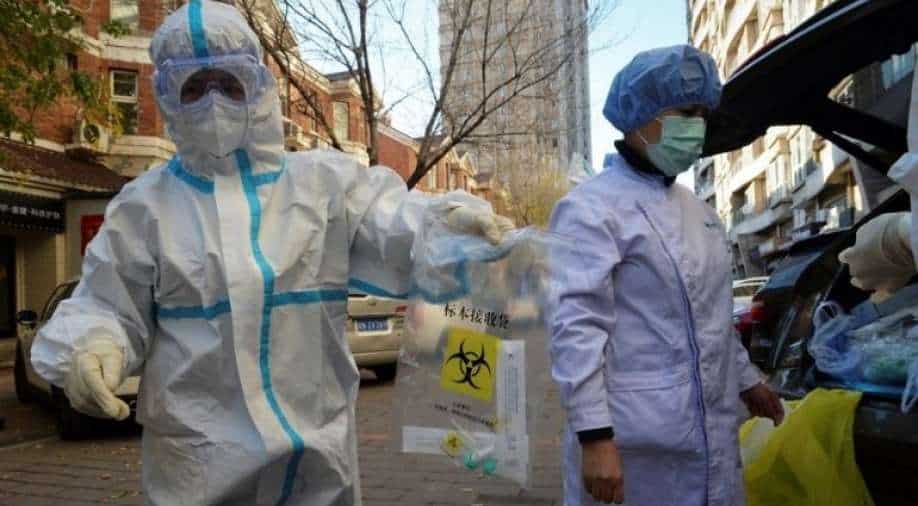 A medical worker in a protective suit holds a plastic bag with swab samples in Tianjin after new coronavirus cases were detected in the city Photograph:( AFP )

According to the National Health Commission, the city emerged as a new area of concern after more than 20 Covid cases were reported there in the last few days, most of them imported from abroad

The population of the Chinese city Tianjin is being rigorously tested after two Omicron cases were reported.

The first two cases confirmed in Tianjin were a 10-year-old girl and a 29-year-old woman working at the after-school center. Both were infected by the omicron variant.

In subsequent testing of close contacts, 18 others tested positive and 767 tested negative as of Saturday night.

The outbreak poses risks to Beijing and the upcoming Winter Olympics, because of the large number of commuters working and living in the two cities.

According to the National Health Commission, the city emerged as a new area of concern after more than 20 Covid cases were reported there in the last few days, most of them imported from abroad.

Authorities have advised residents to stay at or near home to be available for the community-level nucleic-acid screening.

They have been told that until they obtain a negative test result, they will not receive a "green" code on smartphone Covid-tracing apps that nearly all people in China are now required to present when using public transport and in other situations.

It comes after the local transmission of the imported Omicron variant was found in the southern city of Guangzhou.

China has already been struggling with a larger outbreak centred on the northwestern city of Xi'an that has sparked questioning of the country's zero-tolerance policy of strict lockdowns and immediate mass testing to curb outbreaks.

Chinese authorities have adopted draconian measures throughout the pandemic under their policy of seeking to stamp out every last case.

That “zero tolerance” policy, which has led to frequent lockdowns, universal masking, and mass testing, has not been entirely successful.

It has resulted in massive disruptions to travel and trade, but Beijing credits it with largely containing the spread of the virus.