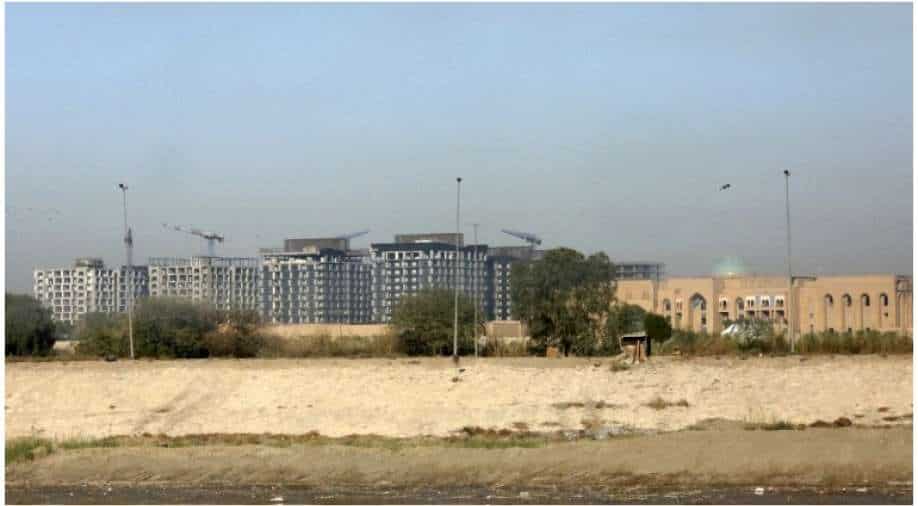 This image shows a partial view of the Green Zone which houses the seat of the Iraqi government as well as the US embassy, in the capital Baghdad on December 19, 2021, after two rockets targeted the area early in the morning. Photograph:( AFP )

First missile was shot down while the second damaged two vehicles. No casualties have been reported

"The Green Zone in Baghdad was the target of two Katyusha rockets. The first was shot down in the air by C-RAM defence batteries, the second fell in a square, damaging two vehicles," the statement said.

AFP quoted a security source to say that the shot down rocket fell near the US embassy, while the second came down roughly 500 metres (1,640 feet) away.

Previously, the source told AFP that two rockets had been shot down near the US embassy.

Captain Bill Urban, spokesman for the US Central Command, told AFP the incident caused no casualties.

He said no shots hit the embassy or the so-called Union III area where US-led coalition forces are based.
No one claimed responsibility for the attack.

In recent months, dozens of rocket assaults or drone bomb attacks have targeted American troops and interests in Iraq.
The attacks are rarely claimed but are routinely pinned on pro-Iran factions.

The latest rocket fire comes after the announcement this week of the end of the "combat mission" in Iraq of the US-led coalition against the Islamic State group.

But roughly 2,500 American soldiers and 1,000 coalition soldiers will remain deployed in Iraq to offer training, advice and assistance to national forces.

Pro-Iran factions in Iraq are calling for the departure of all US forces stationed in the country.

Sunday's attack also coincides with the 10th anniversary of the departure of US troops from Iraq on December 18, 2011, after the invasion and overthrow of former dictator Saddam Hussein in 2003.

Washington then deployed its troops to the country in 2014 to fight IS, which had captured large swathes of the nation in a lightning offensive.