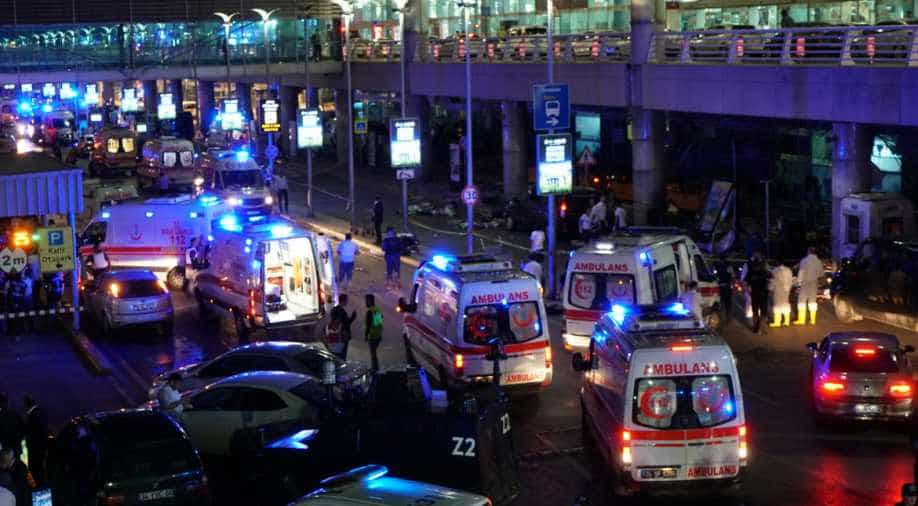 After failing to pass through the regular security system, the terrorists had come back with long-range rifles and opened fire randomly at people. Photograph:( Getty )

The death toll from Tuesday's gun and suicide bomb spree at Ataturk airport has risen to 43, state-run news agency Anadolu said, with 19 foreigners among the dead and more than 200 people injured.

Turkey has been plunged into mourning over the carnage at Ataturk airport, the deadliest yet of several attacks to strike Turkey's biggest city this year.

Police carried out 16 raids across Istanbul today, an official said, with three foreign nationals among the "IS suspects" detained.

"It is probable that at least one attacker was a foreign national," he added, speaking on condition of anonymity.

Turkey has suffered a string of deadly attacks in the past year, blamed on either IS or Kurdish rebels, and the airport attack comes just at the start of the crucial summer tourist season.

Interior minister Efkan Ala told reporters late Wednesday there was an ongoing "serious and comprehensive investigation" into who was behind the attack.

Using another name for IS, he said: "First signs point to Daesh, but it's not certain yet."

CIA director John Brennan said the attack, which has sparked international condemnation, bore the "hallmark" of the jihadist group.

Details are emerging of how the attackers arrived at Turkey's busiest airport by taxi before indiscriminately firing at passengers with automatic rifles and detonating suicide bombs.

"They returned and came back with long-range rifles they took out from their suitcases, and passed the security control by opening fire randomly at people," he said.

"One of them blew himself up outside and the other two took advantage of the panic during the opening of the fire, entered inside and blew themselves up."

A senior source close to the presidency gave a slightly different version of events, saying two attackers blew themselves up on separate floors of the airport before the third followed suit outside.

Another video showed a black-clad attacker running inside the building before collapsing to the ground, apparently felled by a police bullet, and blowing himself up.

Officials have yet to identify the attackers, but the Hurriyet newspaper named one of them as Osman Vadinov, a Chechen who had arrived from Raqa, the IS stronghold in Syria.

The victims include several Saudis, a Chinese national, a Tunisian and a Ukrainian.

Authorities are under pressure to convince visitors that Turkey is still safe, as the vital tourism industry has taken a heavy hit from a string of deadly attacks in the past year.

Ege Seckin, an analyst at IHS Country risk, said the attack was "most likely conducted by the Islamic State to undermine the Turkish economy by attacking the airport ahead of the summer months, when tourism peaks".

Yildirim said Turkey would "increase the presence of specially-trained staff" at the nation's airports.

He moved swiftly after the bombings to deny there had been any lapse in security, but many Turks have been angered by the perceived failure to stop the bombings.

"It was an airport," one man could be heard shouting outside an Istanbul morgue on Wednesday, as devastated families went to collect the bodies of loved ones.

The opposition Cumhuriyet newspaper also expressed anger at what it said was a failure by the nation's leaders to take political responsibility for the attack.

"Is there anyone to resign?" it asked, pointing out that after the IS bombings at Brussels airport and a metro station in March, three Belgian ministers offered their resignation.

Turkey has suffered at least five attacks blamed on IS jihadists, including a blast in Ankara in October that left over 100 dead, the worst in the country's modern history.

In January, a bombing in the heart of Istanbul's tourist district, also blamed on IS, killed a dozen German visitors.

Two months later, three Israelis and an Iranian were killed in another attack attributed to the jihadists on the city's main Istiklal shopping street.