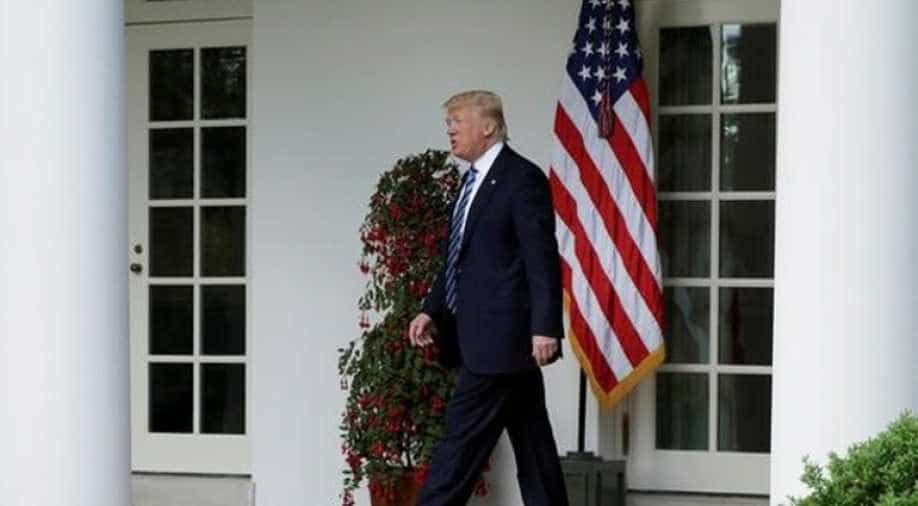 The draft also calls for denying militants physical and online sanctuaries in which to plan and launch attacks and "degrade their efforts to develop and deploy" chemical and biological weapons. Photograph:( AFP )

The 11-page draft, seen on Friday by Reuters, said the US should avoid costly, 'open-ended' military commitments ||A senior administration official said the document describing an overarching counterterrorism approach is separate from a detailed strategy to defeat Islamic State that Trump ordered

A draft of President Donald Trump's new counterterrorism strategy demands that US allies shoulder more of the burden in combating Islamist militants, while acknowledging that the threat of terrorism will never be totally eliminated.

"We need to intensify operations against global jihadist groups while also reducing the costs of American 'blood and treasure' in pursuit of our counterterrorism goals," states the document, which is expected to be released in coming months.

"We will seek to avoid costly, large-scale US military interventions to achieve counterterrorism objectives and will increasingly look to partners to share the responsibility for countering terrorist groups," it says.

However, it acknowledges that terrorism "cannot be defeated with any sort of finality".

Michael Anton, spokesman for the White House National Security Council, said, "As part of its overall approach, the administration is taking a fresh look at the entire US national security strategy, to include the counterterrorism mission - which is especially important since no such strategy has been produced publicly since 2011."

The process is aimed at ensuring "the new strategy is directed against the pre-eminent terrorist threats to our nation, our citizens, our interests overseas and allies," Anton said. "Moreover, this new strategy will highlight achievable and realistic goals, and guiding principles."

Combating Islamic extremism was a major issue for Trump during the 2016 presidential campaign. The draft strategy paper, which officials said was still being fine-tuned at the White House, describes the threat from Islamic militant groups in stark tones.

It remains to be seen how Trump can square his goal of avoiding military interventions with ongoing conflicts involving US troops in Iraq, Syria, Afghanistan, Yemen and elsewhere.

Rather than scale back US commitments, he has so far largely adhered to former Obama administration plans to intensify military operations against militant groups and granted the Pentagon greater authority to strike them in places like Yemen and Somalia.

Trump may soon reverse years of Obama-ordered drawdowns in Afghanistan. His administration is now considering boosting by 3,000 to 5,000 soldiers the 8,400-strong US contingent helping Afghan forces fight a resurgent Taliban, current and former US officials say.

A senior administration official noted that only a small number of troops have been added to US forces in Iraq and Syria under Trump, at the discretion of his military commanders.

"If you do see additions elsewhere, they will be in keeping with this (draft) strategy," said the official, who spoke on condition of anonymity.

The increased pace of US military operations has seen a recent spate of American casualties. The latest came in Somalia, where a Navy SEAL died and two others were wounded in an attack by al Shabaab militants, US officials said on Friday.

Since President Barack Obama released the last US counterterrorism strategy in 2011 before the emergence of Islamic State, the threat has "diversified in size, scope and complexity from what we faced just a few years ago," the draft strategy said.

In addition to Islamic State, the United States and its allies are endangered by a reconstituted al Qaeda, groups such as the Haqqani network and Hezbollah, as well as from homegrown extremists radicalized online, it said.

Bruce Hoffman, director of Georgetown University's Center for Security Studies and who reviewed the document at Reuters' request, said the draft strategy "paints - and I think accurately - a more dire picture" of the threat than the Obama document, which sounded a "triumphalist" tone following al Qaeda leader Osama bin Laden's death in a 2011 US raid in Pakistan.

The senior administration official said the document describing an overarching counterterrorism approach is separate from a detailed strategy to defeat Islamic State that Trump also has ordered.

The draft strategy seen by Reuters appears to flow from Trump's "America First" foreign policy calling for foreign aid cuts and more burden-sharing by allies and alliances such as NATO.

It does not include a signature phrase from Trump's 2016 campaign, "radical Islamic terrorism." Instead, it says that jihadist groups "have merged under a global jihadist ideology that seeks to establish a transnational Islamic caliphate that fosters conflict on a global scale."

The draft's first guiding principle is that the United States "will always act to disrupt, prevent and respond to terrorist attacks against our nation, our citizens, our interests overseas and our allies. This includes taking direct and unilateral action, if necessary."

The administration would boost US homeland security by working with allies and partners to eliminate terrorist leaders, "ideologues, technical experts, financiers, external operators and battlefield commanders."

The draft also calls for denying militants physical and online sanctuaries in which to plan and launch attacks and "degrade their efforts to develop and deploy" chemical and biological weapons.

Yet it provides few details on how the United States, which has led global counterterrorism efforts since the September 11, 2001, attacks, can achieve those goals by passing more of the burden to other countries, many of which lack the requisite military and intelligence capabilities.

The draft makes little mention of promoting human rights, development, good governance and other "soft power" tools that Washington has embraced in the past to help foreign governments reduce grievances that feed extremism.

In contrast, the Obama counterterrorism strategy made "respecting human rights, fostering good governance, respecting privacy and civil liberties, committing to security and transparency and upholding the rule of law" the foremost of its guiding principles.

"Soft power has a role to play, but not to the exclusion of kinetics," or military action, said Hoffman. He called the draft "a very sober depiction of the threat and what is needed now and in the immediate future to counter it."