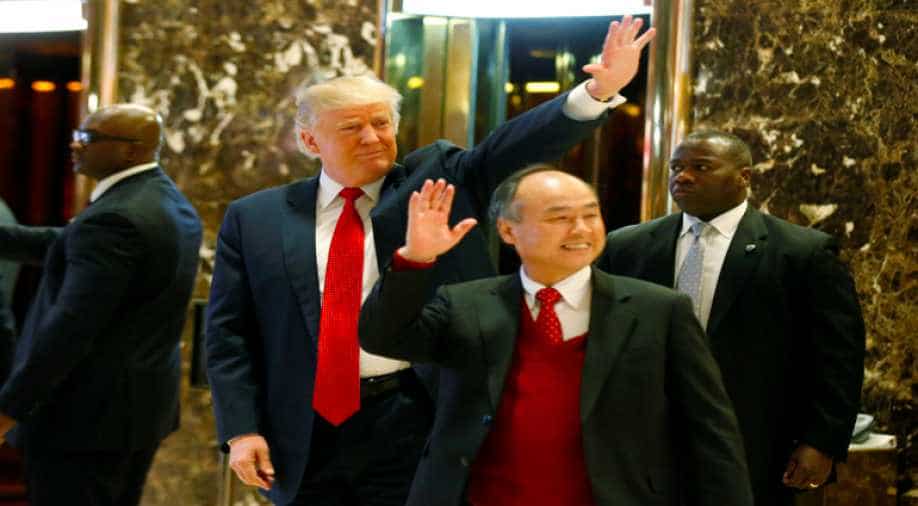 US President-elect Donald Trump on Tuesday  announced a $50 billion Japanese telecoms investment designed to create 50,000 US jobs, claiming another high-stakes personal win for the American economy before kicking off the second leg of a victory tour.

Trump provided no details on the jobs or investment, which he trumpeted following a meeting with Japanese self-made billionaire Masayoshi Son at his headquarters in New York.

The real estate tycoon whose election stunned the world first tweeted the announcement, then strode into the lobby of Trump Tower to brief reporters in person.

"This is Masa of SoftBank from Japan and he's just agreed to invest $50 billion in the United States and 50,000 jobs," the president-elect told reporters, standing with his arm around a grinning Son.

"He's one of the great men of industry, so I just want to thank you very much," added Trump before turning to shake the Japanese magnate's hand.

"I just came to celebrate his new job," said Son, repeating his commitment and saying that SoftBank would be investing in startup companies in America.

In an interview with The Wall Street Journal, Son said the money will be coming from a $100 billion investment fund that he is setting up with Saudi Arabia's sovereign wealth fund and other potential partners.

Trump, who defeated Hillary Clinton by promising to create jobs and campaigning as a political outsider who could shake up the system, claimed the Japanese investment as a personal coup.

"Masa said he would never do this had we (Trump) not won the election!" the maverick Republican wrote on Twitter.

It marked the second time in a week Trump has claimed to have acted personally to save or create American jobs -- allowing himself to make good on a key campaign promise -- after a deal to keep hundreds of manufacturing jobs in Indiana.

That agreement with air-conditioning plant Carrier was announced ahead of his inaugural victory rally in Ohio, and has raised his stock among Republican and Democrat voters alike, a Politico/Morning Consult poll found Tuesday.