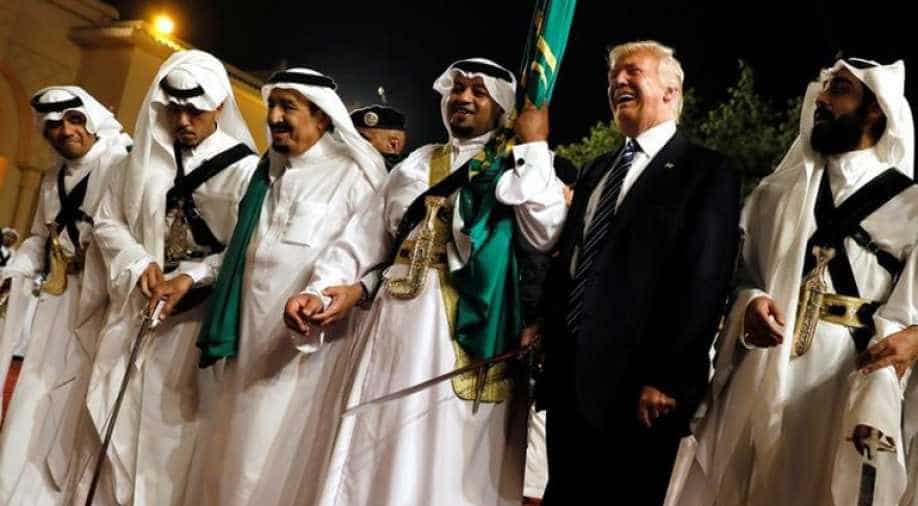 US President Trump dances with a sword as he arrives to a welcome ceremony by Saudi Arabia's King Salman bin Abdulaziz Al Saud at Al Murabba Palace in Riyadh on May 20. Photograph:( Reuters )

Aides say the speech will be 'uplifting' but also 'blunt' in its call for leaders of Muslim countries to take a stand against violent fundamentalism||On Sunday he began a series of meetings with other Arab leaders, including Egyptian President Abdel Fattah al-Sisi, Qatar's Emir Sheikh Tamim bin Hamad

US President Donald Trump is to urge the Islamic world to confront extremism in a highly anticipated speech Sunday to dozens of Muslim leaders in Saudi Arabia.

Aides have said the speech, given in the cradle of Islam, will be "uplifting" but also "blunt" in its call for leaders of Muslim countries to take a stand against violent fundamentalism.

It comes on the second day of a visit to Saudi Arabia, part of an eight-day foreign tour -- Trump`s first since taking office -- that will take him next to Israel and the Palestinian Territories and then to Europe.

The first day saw the announcement of hundreds of billions of dollars in trade deals -- welcome news for Trump as he faces mounting troubles at home linked with the probe into alleged Russian meddling during last year`s election campaign.

Among the agreements was an arms deal worth almost $110 billion with Saudi Arabia, described as the largest in US history, which US Secretary of State Rex Tillerson said was aimed in particular at countering "malign Iranian influence".

The White House has sought to draw a clear distinction during the visit with Trump's predecessor Barack Obama, who Saudi Arabia and its Sunni Arab allies saw as lecturing and soft on their Shiite rival Iran.

Unlike the Obama administration which would often raise concerns over civil liberties with longstanding Arab allies, Trump has made no mention of human rights during his visit so far.He is unlikely to do so in his speech, focusing instead on a centrepiece of his foreign policy: tackling jihadism and its disciples like the Islamic State group and Al-Qaeda.

"He will deliver an inspiring, direct speech on the need to confront radical ideology and the president`s hopes for a peaceful vision of Islam," Trump`s influential national security adviser, HR McMaster, said ahead of the visit.

"He`ll talk about what unites us in uplifting terms," a White House official said, speaking on condition of anonymity.

"But he`ll also be very blunt in talking about the need to confront extremism and the fact that many in the Muslim world have not only not done enough, they've actively abetted this extremism, even as some of them have talked a good game on the surface but in quiet, continue to fund extremism."

The speech has been touted as a major event -- along the lines of a landmark address to the Islamic world given by Obama in Cairo in 2009.

It will be especially sensitive given tensions sparked by the Trump administration`s attempted travel ban targeting several Muslim-majority nations and accusations of anti-Islamic rhetoric.

In December 2015, Trump told a campaign rally he was calling for a "total shutdown" of Muslims entering the United States "until our country's representatives can figure out what the hell is going on".

His words shocked many Americans, with Trump detractors noting that the US Constitution prohibits religious discrimination.

"I think Islam hates us. There is a tremendous hatred there. We have to get to the bottom of it," Trump said in a March 2016 interview with CNN.Still, Trump has been welcomed warmly in Saudi Arabia, where he and first lady Melania Trump were given an extravagant reception by King Salman and the rest of the Saudi royal family.

Trump was awarded the country`s highest civilian honour, attended a series of banquets and receptions and bobbed up and down with dancers in a traditional sword dance welcome ceremony.

The trade deals announced on Saturday were said to be worth in excess of $380 billion and Trump proudly declared the first day of his visit "tremendous".

"That was a tremendous day. Tremendous investments in the United States," Trump said.

"Hundreds of billions of dollars of investments into the United States and jobs, jobs, jobs."

The meeting with Sisi -- an avowed fan of the president -- was especially warm and Trump said he would "absolutely" be putting Egypt on his list of countries to visit "very soon".

Trump referred to Sisi as "my friend" at the start of the talks, adding: "We've really been through a lot together."

Sisi said that Trump was a "unique personality" and "capable of doing the impossible", to which Trump responded "I agree!"

In the meeting with King Hamad, Trump again made a clear break from previous US policy, which saw the Obama administration frequently scold its ally over rights concerns.

Trump told the king it was "a great honour to be with you" and mentioned that there "has been a little strain but there won't be strain with this administration".

Trump, who travels on Monday to Israel and the Palestinian territories before visiting the Vatican, Brussels and Italy for NATO and G7 meetings, is taking his first steps on the world stage as he faces increasing scandal at home.

The last week has seen a string of major developments in Trump`s domestic woes, including the announcement that James Comey, the former FBI chief fired by Trump, has agreed to testify publicly about Russian interference in the US elections.

Reports have also emerged that Trump called Comey "a nut job" and that the FBI have identified a senior White House official as a "significant person of interest" in its probe of Russian meddling.