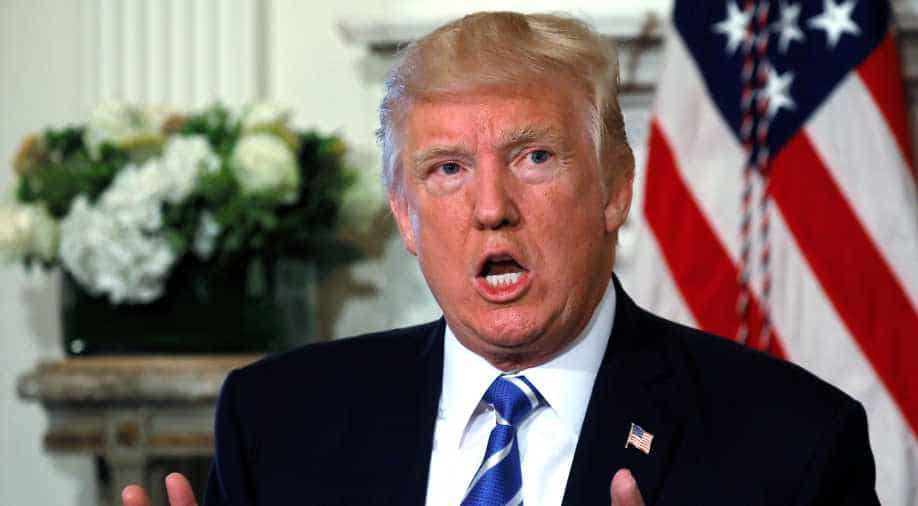 Trump will also have a working dinner with Latin American leaders that will touch on the crisis in Venezuela. Photograph:( Reuters )

On Monday, Trump will hold talks with French President Emmanuel Macron, who will also be making his maiden address at the General Assembly on Tuesday, and with Israeli Prime Minister Benjamin Netanyahu.

US President Donald Trump makes his debut at the United Nations on Monday, with an address on UN reform as a week of intense diplomacy kicks off, dominated by worries about North Korea, Iran and Myanmar.

Trump, who once disparaged the world body as a "club" for "people to get together, talk and have a good time," will lay out his views on how to improve the United Nations a day before he makes his first address to the General Assembly.

About 130 world leaders are attending this year's global gathering, but all eyes will be on Trump, whose "America First" agenda has alarmed both allies and foes.

The UN's number one financial backer, the United States has threatened deep cuts to UN funding that Secretary-General Antonio Guterres has said would create an "unsolvable problem" for the world body.

Guterres, who is pushing for an overhaul of the UN bureaucracy, will also address the event at which leaders will sign a pledge of support for reform.

France and Russia have reacted coolly to the US initiative, amid concerns that the US administration is focused more on cost-cutting than improving the UN's performance.

US Ambassador Nikki Haley was a driving force behind a $600-million-dollar cut to the UN peacekeeping budget this year.

Haley on Friday pointed to the more than 120 countries that back the US-drafted political declaration on UN reform as a "miraculous number," showing there is support for a "massive reform package" led by Guterres.

On Monday, Trump will hold talks with French President Emmanuel Macron, who will also be making his maiden address at the General Assembly on Tuesday, and with Israeli Prime Minister Benjamin Netanyahu.

Both Macron and Netanyahu are expected to raise the future of the Iran nuclear agreement, with the French leader making a strong case for keeping it alive and the Israeli prime minister pushing for its demise.

Trump will also have a working dinner with Latin American leaders that will touch on the crisis in Venezuela.

North Korea's nuclear and missile tests will be in the spotlight with foreign ministers set to discuss enforcing sanctions against Pyongyang during a Security Council meeting on non-proliferation on Thursday.

Also on Thursday, Trump will be holding talks with Japanese and South Korean leaders who have backed the US drive to ratchet up sanctions on North Korea.

The council last week imposed a new raft of measures such as a ban on export textiles and a cap on oil shipments to pile pressure on Pyongyang to come to the table and negotiate an end to its nuclear and missile programs.

Russia and China, however, are calling for diplomatic talks with North Korea while warning that a military option as suggested by the United States would have catastrophic consequences.

British Foreign Secretary Boris Johnson will host a meeting on the military campaign in Myanmar which the United Nations has described as "ethnic cleansing" after more than 400,000 Rohingya Muslims were forced to flee.

The closed-door meeting will be attended by a representative from Myanmar and by foreign ministers from "a range of countries with a strong interest in seeing an end to the violence there," a British diplomat said.

Ahead of the opening of the General Assembly, UN member-states will discuss the aftermath of Hurricane Irma that devastated parts of the United States and the Caribbean.

The hurricane disaster offers a reminder of the destructive force of nature as leaders set their sights on implementing the Paris agreement on climate change despite the US withdrawal from the deal.