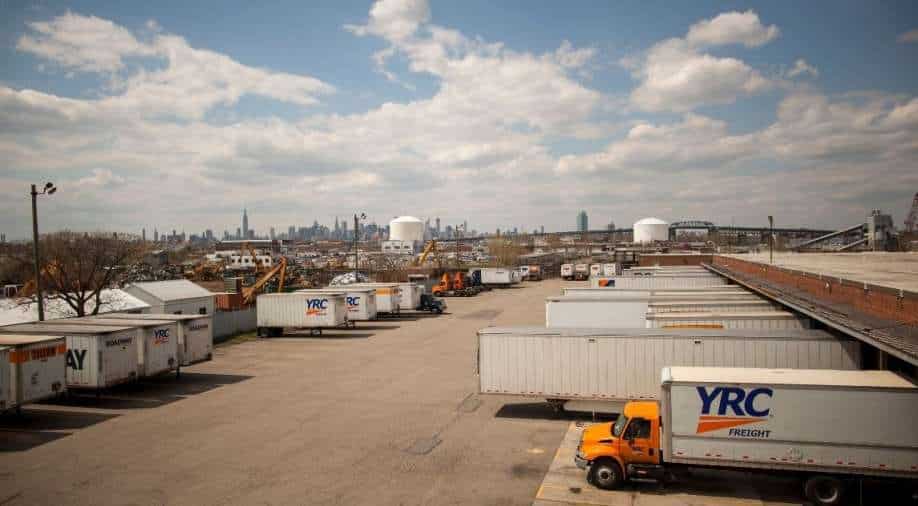 The $2.2 trillion pandemic relief package Congress passed in 2020 included a $17 billion pot of money set up by Congress and controlled by the Treasury Department to assist companies that were considered critical to national security

Democratic lawmakers on Wednesday released a report alleging that top Trump administration officials awarded a $700 million pandemic relief loan to a struggling trucking company in 2020 over the objections of career officials at the Defense Department.

The report, released by the Democratic staff of the House Select Subcommittee on the Coronavirus Crisis, describes the role of corporate lobbyists during the early months of the pandemic in helping to secure government funds as trillions of dollars of relief money were being pumped into the economy. It also suggests that senior officials such as Steven Mnuchin, the former Treasury secretary, and Mark Esper, the former defense secretary, intervened to ensure that the trucking company, Yellow Corp., received special treatment despite concerns about its eligibility to receive relief funds.

“Today’s select subcommittee staff report reveals yet another example of the Trump administration disregarding their obligation to be responsible stewards of taxpayer dollars,” Rep. James Clyburn, D-S.C., the chairman of the subcommittee, said in a statement. “Political appointees risked hundreds of millions of dollars in public funds against the recommendations of career DOD officials and in clear disregard of provisions of the CARES Act intended to protect national security and American taxpayers.”

The $2.2 trillion pandemic relief package Congress passed in 2020 included a $17 billion pot of money set up by Congress and controlled by the Treasury Department to assist companies that were considered critical to national security. In July 2020, the Treasury Department announced it was giving a $700 million loan to the trucking company YRC Worldwide, which has since changed its name to Yellow.

Lobbyists for Yellow had been in close touch with White House officials throughout the loan process and had discussed how the company employs teamsters as its drivers, according to the report.

Mark Meadows, the White House chief of staff, was a “key actor” coordinating with Yellow’s lobbyists, according to correspondences that the committee obtained. The report also noted that the White House’s political operation was “almost giddy” in its effort to assist with the application.

The loan raised immediate questions from watchdog groups because of the company’s close ties to the Trump administration and because it had faced years of financial and legal turmoil. The firm had lost more than $100 million in 2019 and was being sued by the Justice Department over claims that it had defrauded the federal government for a seven-year period. It recently agreed to pay $6.85 million to resolve allegations “that they knowingly presented false claims to the U.S. Department of Defense by systematically overcharging for freight carrier services and making false statements to hide their misconduct.”

To qualify for a national security loan, a company needed certification by the Defense Department.

According to the report, defense officials had recommended against certification because of the accusations that the company had overcharged the government. They also noted that the work that the company had been doing for the federal government — which included shipping meal kits, protective equipment and other supplies to military bases — could be replaced by other trucking firms.

But the day after a defense official notified a Treasury official that the company would not be certified, one of Mnuchin’s aides set up a telephone call between him and Esper.

Following the call, Esper certified that the company was critical to national security and a week later the approval of the loan was announced.

Mnuchin then sent an email to Meadows that included news reports praising the loan. He highlighted positive comments from James Hoffa, the longtime president of the Teamsters union, who according to documents in the report made a direct plea to President Donald Trump about the loan.

At a congressional oversight hearing before leaving office in late 2020, Mnuchin said the loan was appropriate and necessary for saving jobs and maintaining trucking services to the Defense Department. Lawmakers from both parties, such as Sen. Ron Wyden, D-Ore., and Pat Roberts, the Republican former senator from Kansas, had sent letters to Mnuchin urging him to consider the loan application.

Yellow had many connections to the Trump administration. The company had financial backing from Apollo Global Management, a private equity firm with close ties to administration officials. Trump had selected the company’s CEO, Darren Hawkins, to serve on a coronavirus economic task force. And he had nominated the company’s former CEO, William Zollars, to the U.S. Postal Service’s board of governors.

The report accuses Yellow of misrepresenting its business to help secure the loan. It claimed to provide a larger share of trucking services to the Defense Department than the department assessed. Communications included in the report also showed a company executive discussing using funds to catch up on capital investments when the relief money was supposed to be used for offsetting losses from the pandemic. The executive said the company had its “hand in the cookie jar.”

Along with the release of the report, Clyburn sent a letter to the Treasury Department’s inspector general asking for an investigation into whether Yellow had violated the False Claims Act.

A law firm representing Yellow sent a letter to Clyburn before the release of the report defending the company’s actions and describing many of the allegations as “baseless.” The letter noted that company had settled its dispute with the government last month.

The letter, which was written by Marc E. Kasowitz, who was previously Trump’s personal attorney, was provided to The New York Times by Heather Nauert, an adviser to Yellow who was previously a spokesperson for Mike Pompeo, Trump’s secretary of state.