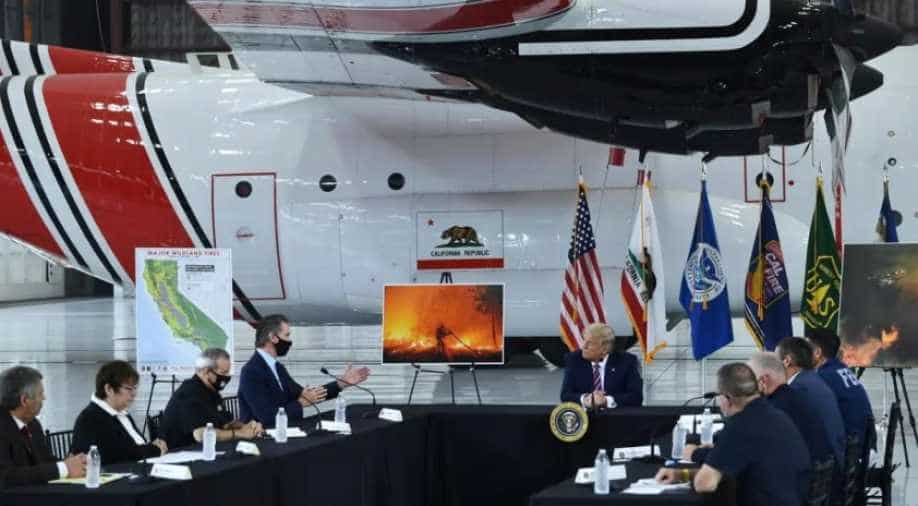 While his Democratic challenger, Joe Biden, stressed the role of climate change in stoking the fires, Trump blamed the blazes on poor forest management.

The wildfires engulfing swaths of the US West assumed centre stage on Monday in the US election campaign, with President Donald Trump visiting California to be briefed on them.

The quick stop during a three-day reelection campaign swing was the first time Trump has visited California since the devastating blazes began.

While his Democratic challenger, Joe Biden, stressed the role of climate change in stoking the fires, Trump blamed the blazes on poor forest management.

The Republican president, seeking re-election on November 3, is due to meet with firefighters and emergency officials in Northern California. Democrats have blasted Trump for remaining mostly silent about the largest wildfires in state history, except for his efforts to blame the blazes on failures by the state government.

"I think this is more of a management situation," Trump said, when asked by a reporter if climate change was a factor behind the fires, claiming that many other countries are not facing a similar problem.

He said forest management changes were something that could be tackled quickly.

Meanwhile, wildfires across Oregon, California and Washington state have destroyed thousands of homes and a half dozen small towns since August, scorching more than 4 million acres (1.6 million hectares) and killing more than two dozen people.

Trump has authorised federal disaster aid for both California and Oregon.

Trump`s administration has waged a series of legal battles with Democratic-run California, the most populous US state, on a variety of issues including immigration and environmental policy. The state for its part has sued his administration more than 100 times.

Trump lost badly in California in the 2016 election and is expected to fare poorly there in November.

The president and his administration have sought to pin the blame for the large wildfires on state officials, saying fuel-choked forests and scrub need to be thinned, fire breaks must be cut and flammable dead leaves cleared from forest floors.